Spell of the Highlander (Mass Market) 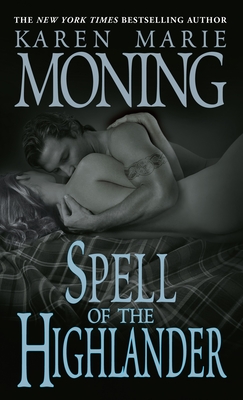 Spell of the Highlander (Mass Market)

This is book number 7 in the Highlander series.

Jessi St. James has got to get a life. Too many hours studying ancient artifacts has given the hardworking archaeology student a bad case of sex on the brain. So she figures she must be dreaming when she spies a gorgeous half-naked man staring out at her from inside the silvery glass of an ancient mirror. But when a split-second decision saves her from a terrifying attempt on her life, Jessi suddenly finds herself confronting six and a half feet of smoldering, insatiable alpha male.

Heir to the arcane magic of his Druid ancestors, eleven centuries ago Cian MacKeltar was trapped inside the Dark Glass, one of four coveted Unseelie Hallows, objects of unspeakable power. When the Dark Glass is stolen, an ancient enemy will stop at nothing to reclaim it, destroying everything in his path–including the one woman who may just hold the key to breaking the ninth-century Highlander’s dark spell. For Jessi, the muscle-bound sex god in the mirror is not only tantalizingly real, he’s offering his protection–from exactly what, Jessi doesn’t know. And all he wants in exchange is the exquisite pleasure of sharing her bed.

Yet even as Cian’s insatiable hunger begins to work its dark magic on Jessi, his ancient enemy is about to obtain the final and most dangerous of the Unseelie Hallows–and the ninth-century Highlander must stop him from getting it. Nothing less than the very fabric of the universe and two passionately entwined lives are at stake–as Cian and Jessi fight to claim the kind of love that comes along but once in an ice age. . . .
Karen Marie Moning is the #1 New York Times bestselling author of the Fever series, featuring MacKayla Lane, and the award-winning Highlander series. She has a bachelor’s degree in society and law from Purdue University.
"This series just keeps getting better! Spell of the Highlander is the seventh of the Highlander books and is every bit as compelling as its predecessors."—freshfiction.com