A Time to Kill: A Jake Brigance Novel (Paperback) 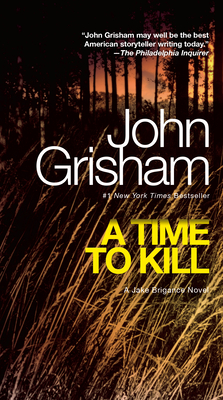 A Time to Kill: A Jake Brigance Novel (Paperback)

This is book number 1 in the Jake Brigance series.

The life of a ten-year-old black girl is shattered by two drunken and remorseless white men. The mostly white town of Clanton in Ford County, Mississippi, reacts with shock and horror at the inhuman crime—until the girl’s father acquires an assault rifle and takes justice into his own hands.

For ten days, as burning crosses and the crack of sniper fire spread through the streets of Clanton, the nation sits spellbound as defense attorney Jake Brigance struggles to save his client’s life—and then his own.

Don’t miss any of John Grisham’s gripping books featuring Jake Brigance:
A TIME TO KILL • SYCAMORE ROW • A TIME FOR MERCY • SPARRING PARTNERS
John Grisham is the author of forty-seven consecutive #1 bestsellers, which have been translated into nearly fifty languages. His recent books include The Judge's List, Sooley, and his third Jake Brigance novel, A Time for Mercy, which is being developed by HBO as a limited series.

Grisham is a two-time winner of the Harper Lee Prize for Legal Fiction and was honored with the Library of Congress Creative Achievement Award for Fiction.

When he's not writing, Grisham serves on the board of directors of the Innocence Project and of Centurion Ministries, two national organizations dedicated to exonerating those who have been wrongfully convicted. Much of his fiction explores deep-seated problems in our criminal justice system.

John lives on a farm in central Virginia.
“Grisham's pleasure in relating the Byzantine complexities of Clanton (Mississippi) politics is contagious and he tells a good story. . . . An enjoyable book.”—Library Journal