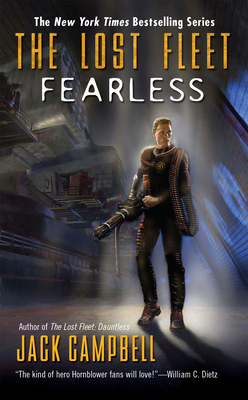 
In Stock—Click for Locations
Captain John “Black Jack” Geary tries a desperate gamble to lead the Alliance Fleet home through enemy-occupied space in this novel in the thrilling Lost Fleet series.

Geary is convinced that the Syndics are planning to ambush the fleet and finish it off once and for all. Realizing the fleet’s best (and only) chance is to do the unexpected, Geary takes the offensive and orders the fleet to the Sancere system. There, a multitude of possible routes home give the Alliance fleet a better chance of avoiding their pursuers—and an attack on the Sancere shipbuilding facilities could decimate the Syndic war effort.

Weary from endless combat, the officers and crew of the Alliance fleet can’t see the sense in charging deeper into enemy territory—prompting a mutiny that divides them, and leaving Geary with the odds higher against him than ever before...
“Jack Campbell” is the pen name of John G. Hemry, a retired naval officer who graduated from the U.S. Naval Academy in Annapolis before serving with the surface fleet and in a variety of other assignments. He is the New York Times bestselling author of The Lost Fleet series and The Lost Stars series, as well as the Stark’s War, Paul Sinclair, and Pillars of Reality series. He lives with his indomitable wife and three children in Maryland.
Praise for The Lost Fleet: Fearless

“Straightforward, solidly written military space opera...It’s all good fun and Campbell has actually given some thought to the problems of combat in space.”—Don D’Ammassa, Critical Mass

“Another satisfying [Campbell] cocktail to slake the thirst of fans who like their space operas with a refreshing moral and intellectual chaser...The Lost Fleet deserves to find a home on your bookshelf.”—SF Reviews

“Jack Campbell has written the most believable space battles I’ve ever seen anywhere—David Sherman, coauthor of the Starfist series

“The Lost Fleet is some of the best military science fiction on the shelves today.”—SF Site

“Will grip the audience...Black Jack is a fascinating hero.”—Alternative Worlds