Fantasy Football The Next Level: How to Build a Championship Team Every Season (Paperback) 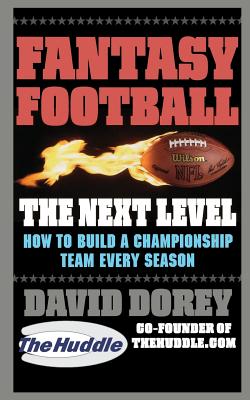 Fantasy Football The Next Level: How to Build a Championship Team Every Season (Paperback)


Not On Our Shelves—Ships in 1-5 Days
Leading fantasy football prognosticator David Dorey provides a "concise and intelligent game plan to beat the competition" in this expert guide (Tim Green, New York Times Bestselling Author of Dark Side of the Game).
Between 20 and 30 million people play fantasy football each year. Now, Fantasy Football: The Next Level goes beyond stats and projections to teach readers a proven approach to drafting and managing a team that succeeds - in any league. Dorey's wealth of tips, tools and techniques - based on two decades of fantasy football expertise - will help experienced players and newcomers alike win their championships every season.

Learn how to:
Understand the true value of each position to your team's success using LAG analysis
Get a handle on your league's scoring system and use it to your advantage
Keep your focus and your discipline on draft day using the Advanced Draft Tracker
Ignore the hype surrounding last year's superstar--and build your team with players who will produce this season.
David Dorey is the co-founder and co-owner of the immensely popular Web site www.TheHuddle.com and is the primary author of the annual BradyGames Fantasy Football Handbook. Considered the leading fantasy football prognosticator in the world, David has won expert leagues held by Fantasy Football Index, Fantasy Football Handbook, Fantasy Football Pro Forecast, and "The Draft 2006," where he single-handedly beat 181 teams. He lives in Dallas, Texas.