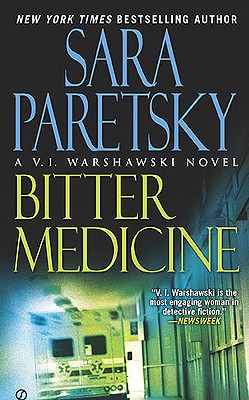 This is book number 4 in the A V.I. Warshawski Novel series.

Private eye V.I. Warshawski finds herself up against rampant corruption in the city of Chicago in the fourth novel in Sara Paretsky’s New York Times bestselling series.

V.I. Warshawski knows her friend Consuelo’s pregnancy is already risky—she’s sixteen and diabetic—but when the baby arrives prematurely, suddenly two lives are at stake. Despite V.I.’s efforts to provide Consuelo with proper care, both mother and daughter die in the local hospital. Suspecting malpractice, V. I. begins an investigation—and a reluctant romance with an ER doctor. But deadly complications arise when a series of vicious murders and an attack on a women’s clinic lead her to suspect a cold-blooded cover-up. And if V.I. isn’t careful, she just might have delivered her final case...
Sara Paretsky is the New York Times bestselling author of the renowned V.I. Warshawski novels. Her many awards include the Cartier Diamond Dagger Lifetime Achievement Award from the British Crime Writers' Association and the 2011 Mystery Writers of America's Grand Master Award. She lives in Chicago.
Praise for Bitter Medicine

“The plot [is] fast moving, the dialogue is snappy, the premise for murder persuasive. The novel hasn’t a single snag in its springs.”—Chicago Sun-Times

“A dense, convincing, fast-moving plot, a dauntless but vulnerable heroine, a fine-tuned ear for real-life dialogue and a sharp eye for the Chicago scene. Superior stuff.”—The Kirkus Reviews

“This fourth story narrated by the spiky detective is the series' most suspenseful so far.”—Publishers Weekly