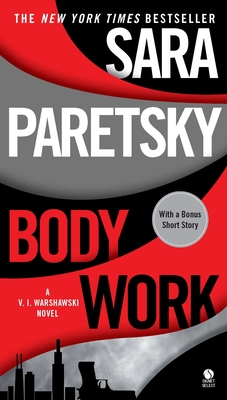 This is book number 14 in the A V.I. Warshawski Novel series.

“V.I. Warshawski is back on the case. This investigation finds death at a local night club full of odd characters. From the artist who lets people draw art on her body to the burly thugs who hang out there and the young vets trying to keep their post-Iraq War demons at bay, Body Work is one terrific read. Highly recommended!”
— Linda Dewberry, Whodunit? Books, Olympia, WA

Chicago’s Club Gouge attracts an eclectic audience, from bohemian types to Ukranian mobsters to young men just back from the war. And tonight, V.I. Warshawski is in the crowd too. The edgy stage show stars The Body Artist, who invites audience members to draw on her naked flesh. But things get a lot edgier when a woman sketches a picture on the Body Artist—and one of the veterans flies into a drunken rage. Next thing V.I. knows, she’s cradling the woman’s dying body in an alley, and a PTSD-stricken soldier is presumed guilty. But he’s also comatose after a drug overdose, and the mystery of what exactly set him off—and what kinds of shady activities are really happening at Club Gouge—will lead V.I. to a truth as explosive as the IEDs that lurk on the roadsides of Iraq.

Bonus in this Edition: A Short Story Featuring V.I. Warshawski
Sara Paretsky is the New York Times bestselling author of the renowned V.I. Warshawski novels. Her many awards include the Cartier Diamond Dagger Lifetime Achievement Award from the British Crime Writers' Association and the 2011 Mystery Writers of America's Grand Master Award. She lives in Chicago.
Praise for Body Work

“Warshawski presents an irresistible combination...she's like Spider-Man with a P.I. license.”—Chicago Sun-Times