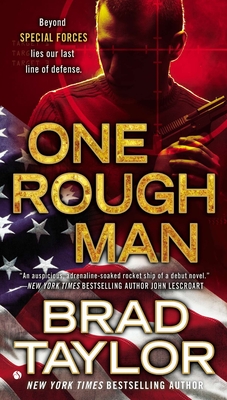 This is book number 1 in the A Pike Logan Thriller series.

They call it the Taskforce. Commissioned at the highest level of the U.S. government. Protected from the prying eyes of Congress and the media. Designed to operate outside the bounds of U.S. law. Trained to exist on the ragged edge of human capability.

Pike Logan was the most successful operator on the Taskforce, his instincts and talents unrivaled—until personal tragedy permanently altered his outlook on the world. Pike knows what the rest of the country might not want to admit: The real threat isn’t from any nation, any government, any terrorist group. The real threat is one or two men, controlled by ideology, operating independently, in possession of a powerful weapon.

Buried in a stack of intercepted chatter is evidence of two such men. The transcripts are scheduled for analysis in three months. The attack is mere days away. It is their bad luck that they’re about to cross paths with Pike Logan. Because Pike Logan has nothing left to lose.
Brad Taylor is the author of the New York Times bestselling Pike Logan series. He served for more than twenty years in the U.S. Army, including eight years in 1st Special Forces Operational Detachment–Delta, commonly known as Delta Force. He retired as a Special Forces lieutenant colonel and now lives in Charleston, South Carolina.
Praise for One Rough Man

“An auspicious, adrenaline-soaked rocket ship of a debut novel. Taylor’s protagonist, Pike Logan, is one rough man who is one bad dude—as a superhero, Pike ranks right up there with Jason Bourne, Jack Reacher, and Jack Bauer.”—John Lescroart, New York Times bestselling author

“The deadly duel between Pike and the terrorists is both cerebral and graphically violent...[Taylor] brings such incredible realism and authenticity that readers feel like they are looking over the shoulders of a real antiterrorist operation.”—Library Journal