Enemy of Mine (A Pike Logan Thriller #3) (Paperback) 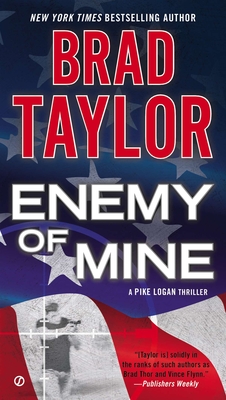 Enemy of Mine (A Pike Logan Thriller #3) (Paperback)

This is book number 3 in the A Pike Logan Thriller series.

Pike Logan and the Taskforce trail a trained killer through the Middle East in this heart-pounding installment of Brad Taylor’s New York Times bestselling series.

A tentative peace between Israel and Palestine has been brokered by the United States. But the Taskforce—a clandestine team operating outside of US law to protect the country from terrorism—hears of an assassination attempt on the American envoy sent to solidify the treaty. The Taskforce must devote every resource to saving his life—and preventing another bloody outbreak of violence.

Taskforce operator Pike Logan and his partner, Jennifer Cahill, must hunt down the assassin through the Middle East, following a trail that becomes more perilous at every turn. And they must deal with terrorist organizations, independent killers, and shaky allies to uncover the biggest threat of all: an American citizen hiding a secret that just may destroy everything, including the Taskforce.
BRAD TAYLOR is the author of the New York Times bestselling Pike Logan series. He served for more than twenty years in the U.S. Army, including eight years in 1st Special Forces Operational Detachment–Delta, commonly known as Delta Force. He retired as a Special Forces lieutenant colonel and now lives in Charleston, South Carolina.
Praise for Enemy of Mine

“The story moves along at a rapid clip....Satisfies from start to finish.”—Kirkus Reviews (starred review)

“Few authors write about espionage, terrorism, and clandestine hit squads as well as Taylor does....His boots-on-the-ground insight into the situation in the Middle East and special skills in ‘irregular warfare’ and ‘asymmetric threats’ give his writing a realistic, graphic tone.”—Houston Press

“Pike Logan returns in another stellar effort from Taylor....Readers of novels set in the world of Special Forces have many choices, but Taylor is one of the best....The added female viewpoint here provides a fascinating perspective on a primarily male-dominated world.”—Booklist