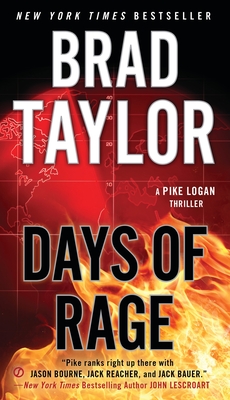 This is book number 6 in the A Pike Logan Thriller series.

Pike Logan and the Taskforce are used to being the hunters. But in this explosive “thriller that really thrills” (Publishers Weekly) from New York Times bestselling author Brad Taylor, they are the hunted...

Intent on embroiling the US in a quagmire that will sap its economy and drain its legitimacy, Russia passes a potential weapon of mass destruction to Boko Haram, an extreme Islamic sect in Nigeria. The Russian FSB believes the weapon, a relic of the Cold War, has deteriorated and is no longer effective, but they are wrong. Boko Haram has the means for mass destruction, which will be set loose upon a multitude of unsuspecting innocents on one of the world’s grandest stages.

Trying to uncover who might be stalking them, Pike Logan and the Taskforce have no idea what has been set in motion. But there is another secret from the Cold War buried in the Russian FSB, and exposing it will mean the difference between life and death for millions.
BRAD TAYLOR is the author of the New York Times bestselling Pike Logan series. He served for more than twenty years in the U.S. Army, including eight years in 1st Special Forces Operational Detachment–Delta, commonly known as Delta Force. He retired as a Special Forces lieutenant colonel and now lives in Charleston, South Carolina.
Praise for Days of Rage

“Former Delta Force officer Taylor combines up-to-the-minute spy craft with musings about the morality of murder, even when justified, and shows that the latest gadgetry still can’t replace human intuition and skill. Another exciting spy thriller from an author who knows the territory.”—Booklist

“Taylor is adept at combining past tragedies, like the terrorist attack on the 1972 Munich Olympics, with more recent developments, like the Snowden disclosures, and tracking the geopolitical changes in between. Throw in modern technology, gunfights, hand-to-hand combat, and a daring race to prevent a disaster that would make the Munich Olympics attack pale by comparison, and you have a thriller that really thrills.”—Publishers Weekly