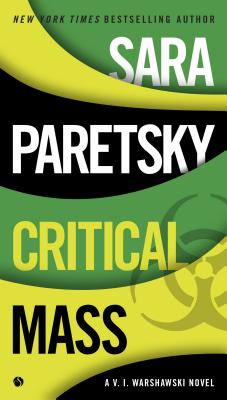 This is book number 16 in the A V.I. Warshawski Novel series.

Chicago’s V. I. Warshawski “is at her stubborn, reckless, compassionate best in this complicated page-turner about selfish secrets passed down through generations” (Booklist).

In 1939, Dr. Lotty Herschel, V. I. Warshawki’s closest friend in Chicago, escaped the Holocaust in Vienna with her childhood playmate, Kitty Saginor Binder. Though the two drifted and animosities grew between them over the years, when Kitty’s daughter finds her life in danger, she turns to Lotty for help. In turn, Lotty summons V. I. to take the case.

The threats on the daughter’s life at first seem a simple case of bad drug dealings, but V. I. soon discovers that they are just the tip of an iceberg of lies secrets and silence whose origins trace back to the deadly race among America, Germany, Japan, and England to develop the atomic bomb. And while the secrets may be old, the people who continue to guard them will do anything to make sure they stay buried...
Sara Paretsky is the New York Times bestselling author of the renowned V.I. Warshawski novels. Her many awards include the Cartier Diamond Dagger Lifetime Achievement Award from the British Crime Writers' Association and the 2011 Mystery Writers of America's Grand Master Award. She lives in Chicago.
Praise for Critical Mass

“Both Warshawski and Paretsky are at the top of their forms.”—Tampa Bay Times

“Paretsky at her best, describing with a reporter's eye and a painter's vision the light and texture of a place.”—Washington Post

“Paretsky still writes with the kind of dazzling, diamond-hard clarity that can break your heart on every other page.”—Chicago Tribune