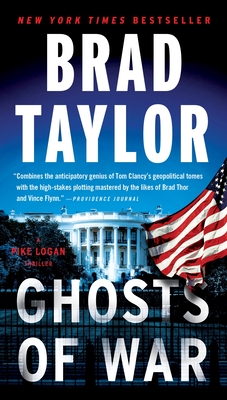 This is book number 10 in the A Pike Logan Thriller series.

The Taskforce has stopped countless terrorist threats across the globe, operating outside of US law to prevent the death of innocents. But now, along the fault lines of the old Iron Curtain, the danger is far greater than a single attack. With Russia expanding its influence from Syria to the Baltic States, the Taskforce is placed on stand-down because of the actions of one rogue operator.

Meanwhile, Pike Logan and Jennifer Cahill travel to Poland, hired to verify artifacts hidden for decades in a fabled Nazi gold train, only to find themselves caught amid growing tensions between East and West. A Russian incursion into Belarus under the facade of self-defense is trumped by a horrific attack against the United States, driving NATO to mobilize even as it tries to determine who is behind the strike.

On the brink of war, Pike and Jennifer discover that there is a separate agenda in play, one determined to force a showdown between NATO and Russia.  With time running out, and America demanding vengeance, Pike and Jennifer race to unravel the mystery before a point of no return is reached. Unbeknownst to them, there is another attack on the way.

One that will guarantee World War III.
BRAD TAYLOR is the author of the New York Times bestselling Pike Logan series. He served for more than twenty years in the U.S. Army, including eight years in 1st Special Forces Operational Detachment–Delta, commonly known as Delta Force. He retired as a Special Forces lieutenant colonel and now lives in Charleston, South Carolina.
Praise for Ghosts of War

“Brad Taylor continues to solidify his claim as the best pure action thriller writer out there today....Ghosts of War combines the anticipatory genius of Tom Clancy’s geopolitical tomes with the high-stakes plotting mastered by the likes of Brad Thor and Vince Flynn. A slam bang, read-it-till-you-drop thriller with as much brains as brawn.”—Providence Journal

“In this tenth book featuring Pike Logan, author Brad Taylor will have your heart pounding and your pulse racing out of control.”—Suspense Magazine

“Ghosts of War might not just be Brad Taylor’s best novel but the best thriller of the year.”—ConservativeBookClub.com

“Brad Taylor continues to amaze....[Ghosts of War] uses a bigger canvas than [Taylor] has employed previously, yet his transition is flawless, and is every bit as suspenseful, exciting and believable as his earlier novels. One can almost see the movement in the real world, following what he lays out in exquisite detail, in the next month or even in the next week.”—Bookreporter.com

“Anyone who was a fan of the late legendary thriller author Vince Flynn should read Taylor, the heir apparent to the Mitch Rapp series....Ghosts of War is action packed, fast-paced, and gripping.”—Crimespree Magazine