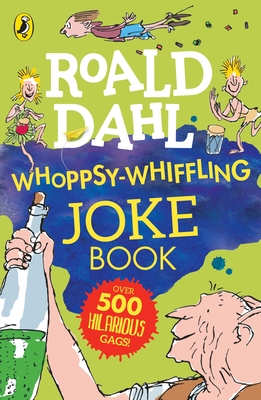 
Not On Our Shelves—Ships in 1-5 Days
Roald Dahl is known for his humor! This joke book is an ideal companion to his beloved novels.

Roald Dahl's Whoppsy-Whiffling Joke Book is a collection of hundreds of great jokes that would make even the Trunchbull laugh! Inspired by Roald Dahl's wonderful world, these gigglesome gags are guaranteed to raise a chuckle from human beans young and old.

CONTENT NOTE: The jokes in this book may cause reader to become the embodiment of the crying-laughing emoji. Side effects include but are not limited to stomach pains, tears of joy, falling off chairs, and flailing.
Roald Dahl (1916–1990) was born in Llandaff, South Wales, and went to Repton School in England. His parents were Norwegian, so holidays were spent in Norway. As he explains in Boy, he turned down the idea of university in favor of a job that would take him to "a wonderful faraway place." In 1933 he joined the Shell Company, which sent him to Mombasa in East Africa. When World War II began in 1939, he became a fighter pilot and in 1942 was made assistant air attaché in Washington, where he started to write short stories. His first major success as a writer for children was in 1964. Thereafter his children's books brought him increasing popularity, and when he died, children mourned the world over, particularly in Britain where he had lived for many years.