The Outlier: The Unfinished Presidency of Jimmy Carter (Hardcover) 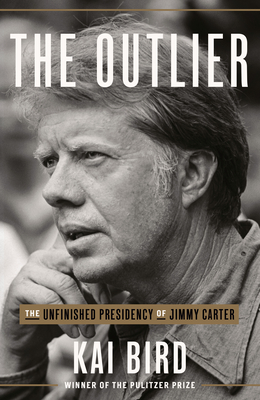 The Outlier: The Unfinished Presidency of Jimmy Carter (Hardcover)

Four decades after Ronald Reagan’s landslide win in 1980, Jimmy Carter’s one-term presidency is often labeled a failure; indeed, many Americans view Carter as the only ex-president to have used the White House as a stepping-stone to greater achievements. But in retrospect the Carter political odyssey is a rich and human story, marked by both formidable accomplishments and painful political adversity. In this deeply researched, brilliantly written account, Pulitzer Prize–winning biographer Kai Bird deftly unfolds the Carter saga as a tragic tipping point in American history.

As president, Carter was not merely an outsider; he was an outlier. He was the only president in a century to grow up in the heart of the Deep South, and his born-again Christianity made him the most openly religious president in memory. This outlier brought to the White House a rare mix of humility, candor, and unnerving self-confidence that neither Washington nor America was ready to embrace. Decades before today’s public reckoning with the vast gulf between America’s ethos and its actions, Carter looked out on a nation torn by race and demoralized by Watergate and Vietnam and prescribed a radical self-examination from which voters recoiled. The cost of his unshakable belief in doing the right thing would be losing his re-election bid—and witnessing the ascendance of Reagan.

In these remarkable pages, Bird traces the arc of Carter’s administration, from his aggressive domestic agenda to his controversial foreign policy record, taking readers inside the Oval Office and through Carter’s battles with both a political establishment and a Washington press corps that proved as adversarial as any foreign power. Bird shows how issues still hotly debated today—from national health care to growing inequality and racism to the Israeli-Palestinian conflict—burned at the heart of Carter’s America, and consumed a president who found a moral duty in solving them.

Drawing on interviews with Carter and members of his administration and recently declassified documents, Bird delivers a profound, clear-eyed evaluation of a leader whose legacy has been deeply misunderstood. The Outlier is the definitive account of an enigmatic presidency—both as it really happened and as it is remembered in the American consciousness.
Kai Bird is an award-winning historian and journalist. Executive Director of the Leon Levy Center for Biography, he is the acclaimed author of biographies of John J. McCloy and of McGeorge and William Bundy. He won the Pulitzer Prize for Biography for American Prometheus: The Triumph and Tragedy of J. Robert Oppenheimer (co-authored with Martin J. Sherwin). His work includes critical writings on the Vietnam War, Hiroshima, nuclear weapons, the Cold War, the Arab-Israeli conflict, and the CIA. He lives in New York City and Washington, D.C., with his wife, Susan Goldmark.
“An ‘outlier’ among politicians, Carter shows what democratic politics could be, if the power-hungry, dishonest figures would just get out of the way. Bird’s book offers a rich and compelling account of Carter’s sincere efforts to make American policies match the nation’s ideals.”—The Washington Post

“In Kai Bird’s latest masterpiece, a book that models the virtues of the biographer’s craft, Jimmy Carter receives his due. Deeply empirical and exquisitely sculpted, The Outlier . . . is a landmark. . . . Bird’s treatment gives Carter’s presidency the deep analysis it deserves.” —Foreign Policy

“Bird’s nuanced study not only sets the record straight on Carter’s misunderstood presidency, it brings him to life in a way that few other biographers have been able to thus far.”—Variety

“A bracing reminder that the 39th president was a man of probity, decency, high hopes, and high moral standards . . . Bird’s take on whom he calls ‘our most enigmatic president’ is relentlessly fair-minded. [The Outlier] redeems [Carter’s] presidency and reminds us of how callous we might have been during his years in office.” —The Boston Globe

“This beautifully written book will take its place alongside other superb one-volume biographies of American presidents. The Outlier will raise readers’ estimates of Jimmy Carter’s term in office.”—Robert Dallek, New York Times bestselling author of Franklin D. Roosevelt and An Unfinished Life

“A grand work of revisionist history, prodigiously researched and gracefully written, The Outlier tells the story of a singular man and a unique presidency at a critical point in American and world history.”—David Nasaw, New York Times bestselling author of The Last Million

“Bird tells the story with sympathy, intelligence, and a wealth of marvelously organized information. The Outlier is a pleasure to read.”—Vivian Gornick, author of Fierce Attachments

“Books about presidents are often fat and dull—not this one. Bird has talked to everybody and written a compelling account of the most underrated president in American history.”—Thomas Powers, Pulitzer Prize–winning journalist and author of The Killing of Crazy Horse

“Incisive . . . [The Outlier is] the best study to date of the Carter era and a substantial contribution to the history of the 1970s.”—Kirkus Reviews (starred review)

“. . . a lucid, penetrating portrait that should spur reconsideration of Carter’s much-maligned presidency.”—Publishers Weekly