Spirits of the Earth: A Guide to Native American Nature Symbols, Stories, and Ceremonies (Paperback) 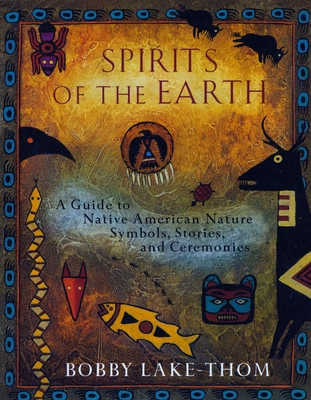 Spirits of the Earth: A Guide to Native American Nature Symbols, Stories, and Ceremonies (Paperback)


Not On Our Shelves—Ships in 1-5 Days
An extraordinary compilation of legends and rituals about nature's ever-present signs. From the birds that soar above us to the insects beneath our feet, Native American healer Bobby Lake-Thom shows how the creatures of the earth can aid us in healing and self-knowledge.

“There are ancient secrets and lessons hidden in nature. If you seek for guidance, you will discover truth.”—Bobby Lake-Thom

Much of the ancient knowledge that has been passed down from Native American medicine men, or shamans is in danger of being lost. Bobby Lake-Thom, a Native American healer known as Medicine Grizzly Bear, has sought to preserve this powerful heritage by sharing his wisdom and experience learning from the world around us.

What does it mean if a hawk appears in a dream? What are the symbolic interpretations of a deer, a skunk, a raccoon? Lake-Thom, who has studied with the elders of many tribes, explains the significance of animal figures as manifestations of good or evil, and shows how we can develop our own powers of awareness and intuition. The first book of its kind, this practical and enlightening resource includes dozens of fascinating animal myths and legends, as well as exercises and activities that draw upon animal powers for guidance, healing, wisdom, and the expansion of spiritual influences in our lives. You'll discover here:

• How animals, birds, and insects act as signs and omens
• The significance of vision quests
• How to make and use a medicine wheel
• The role of spirit symbols—and how they affect the unconscious
• Exercises for creative dreaming
• The power of the earth-healing ceremony
• How to increase your spiritual strength and create sacred spaces
• And more....
Bobby Lake-Thom, known as Medicine Grizzly Bear, is a traditional Native healer and spiritual teacher of Karuk and Seneca descent (affiliated with the Quartz Valley Indian Reservation in California). He has been schooled in both Western and Native american traditions and has taught and lectured extensively aross the United States for more than three decades. He is the author of two previous books on Native American culture and spirituality, Native Healer and Chilula: People from the Ancient Redwoods, and his articles have appeared in The Indian Historian, The Journal for Ethnic Studies, Quest magazine, Shaman's Drum, and other publications. He lives near Mt. Shasta in Yreka, California.
“Lake-Thom, a healer and a descendant of three Native American tribes, combines his own experience, work with tribal elders, and readings from folk tales to explain the significance of good and bad luck symbols to these tribes...Clear and straightforward.”—Library Journal