Turn Right at Machu Picchu: Rediscovering the Lost City One Step at a Time (Paperback) 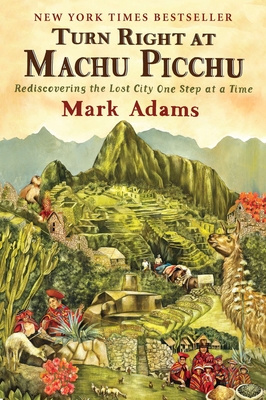 Turn Right at Machu Picchu: Rediscovering the Lost City One Step at a Time (Paperback)

What happens when an unadventurous adventure writer tries to re-create the original expedition to Machu Picchu?

In 1911, Hiram Bingham III climbed into the Andes Mountains of Peru and “discovered” Machu Picchu. While history has recast Bingham as a villain who stole both priceless artifacts and credit for finding the great archeological site, Mark Adams set out to retrace the explorer’s perilous path in search of the truth—except he’d written about adventure far more than he’d actually lived it. In fact, he’d never even slept in a tent.

Turn Right at Machu Picchu is Adams’ fascinating and funny account of his journey through some of the world’s most majestic, historic, and remote landscapes guided only by a hard-as-nails Australian survivalist and one nagging question: Just what was Machu Picchu?
Mark Adams is the author of the acclaimed history Mr. America, which The Washington Post named a Best Book of 2009, and the New York Times bestsellers Meet Me in Atlantis and Turn Right at Machu Picchu. A writer for many national magazines, including GQ, Men's Journal, and New York, he lives near New York City with his wife and children.
Praise for Turn Right at Machu Picchu

“A serious (and seriously funny) travelogue, a smart and tightly written history, and an investigative report into perhaps the greatest archaeological discovery in the last century.”—NationalGeographic.com

“An engaging, informative guide to all things Inca.”—Entertainment Weekly

“With a healthy sense of humor...Adams unearths a fascinating story, transporting his readers back to 1911, when Yale professor Hiram Bingham III hiked the Andes and stumbled upon on of South America's most miraculous and cloistered meccas.”—NPR.org