The Operators: The Wild and Terrifying Inside Story of America's War in Afghanistan (Paperback) 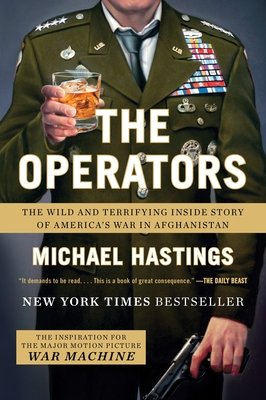 The Operators: The Wild and Terrifying Inside Story of America's War in Afghanistan (Paperback)

From the author of The Last Magazine, a shocking behind-the-scenes portrait of our military commanders, their high-stake maneuvers, and the political firestorm that shook the United States.

In the shadow of the hunt for Bin Laden and the United States’ involvement in the Middle East, General Stanley McChrystal, the commanding general of international and U.S. forces in Afghanistan, was living large. His loyal staff liked to call him a “rock star.” During a spring 2010 trip, journalist Michael Hastings looked on as McChrystal and his staff let off steam, partying and openly bashing the Obama administration. When Hastings’s article appeared in Rolling Stone, it set off a political firestorm: McChrystal was unceremoniously fired.

In The Operators, Hastings picks up where his Rolling Stone coup ended. From patrol missions in the Afghan hinterlands to senior military advisors’ late-night bull sessions to hotel bars where spies and expensive hookers participate in nation-building, Hastings presents a shocking behind-the-scenes portrait of what he fears is an unwinnable war.  Written in prose that is at once eye-opening and other times uncannily conversational, readers of No Easy Day will take to Hastings’ unyielding first-hand account of the Afghan War and its cast of players.

Michael Hastings was a contributing editor to Rolling Stone and a correspondent at large for BuzzFeed. Before that he worked for Newsweek, where he rose to prominence covering the wars in Iraq and Afghanistan. He was the recipient of the 2010 George Polk Award for his Rolling Stone magazine story The Runaway General. Hastings was the author of three books, I Lost My Love in Baghdad, Panic 2012, The Operators, and The Last Magazine. He died in 2013, and was posthumously honored with the Norman Mailer Award for Emerging Journalist.

Praise for THE OPERATORS by Michael Hastings:

"The life of a general is something to see, especially when it's Stanley McChrystal, America's four-star, rock star commander, at the height of his power and panache in Afghanistan. It's a hard story to get, and hard to tell it well, but in the hands of Michael Hastings, it's a world-class job of reporting and a joy to read."
—Richard Ben Cramer, author of What it Takes and DiMaggio

"The most impact-laden story of the year...written by a perfect specimen of the new breed of journalist-commentator."
—Barrett Brown, Vanity Fair

"An impressive feat of journalism by a Washington outsider who seemed to know more about what was going on in Washington than most insiders did."
—Frank Rich, New York Times

"The Operators is a troubling first-person narrative about a bizarre episode in U.S. military history, as well as a trenchant analysis of the disaster in Afghanistan. Hastings … brings a fresh eye and a brutally authentic voice to America's decade-old misadventure in Afghanistan.”
—Bob Drogin, Los Angeles Times

“The Operators seems destined to join the pantheon of the best of GWOT literature, not just for its rock-and-roll details, but for its piercing chronicles of a world gone mad.”
—Matt Gallagher, Newsweek/Daily Beast

“As the situation in Afghanistan grows increasingly muddy, [Hasting’s] disciplined adherence to solid journalistic practices and his acute eye for sharp scene setting makes much of the chaos comprehensible. Hastings has definitely taken up the traditional banner of the intrepid war correspondent, but he’s simultaneously shot it through with iconoclastic holes; the effect is illuminating on many levels.”
—Kirkus Reviews

“Hastings brilliantly intertwines narratives…. Hasting's first-class, engrossing reportage reveals unsettling yet human flaws behind one of recent history's most lionized military figures, and a war which purportedly began as a response to terrorism, but whose aims--in the author's estimation--remain ambiguous.”

"Superb... the book provides vital insights about the war not available anywhere else... One of the most eye-opening accounts provided yet...from one of the bravest and most intrepid journalists who has covered it.”