The Devil's Delusion: Atheism and its Scientific Pretensions (Paperback) 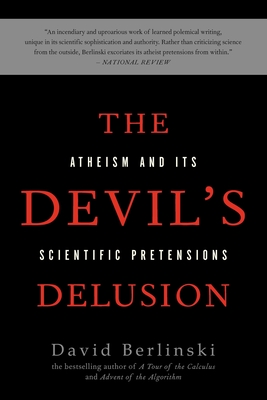 The Devil's Delusion: Atheism and its Scientific Pretensions (Paperback)


Not On Our Shelves—Ships in 1-5 Days
From a bestselling author, an “incendiary and uproarious” assault on the pretensions of scientific atheists (National Review)

Militant atheism is on the rise. Prominent thinkers including Richard Dawkins, Sam Harris, Daniel Dennett, and Christopher Hitchens have published best-selling books denigrating religious belief. And these authors are merely the leading edge of a larger movement that includes much of the scientific community. In response, mathematician David Berlinski, himself a secular Jew, delivers a biting defense of religious thought. The Devil's Delusion is a brilliant, incisive, and funny book that explores the limits of science and the pretensions of those who insist it is the ultimate touchstone for understanding our world.
David Berlinski holds a Ph.D. from Princeton University and has taught mathematics and philosophy at universities in the United States and France. He is a senior fellow of the Discovery Institute’s Center for Science and Culture. The bestselling author of A Tour of the Calculus and Newton's Gift, as well as many other books, he lives in Paris.
"An incendiary and uproarious work of learned polemical writing, unique in its scientific sophistication and authority. Rather than criticizing science from the outside, Berlinski excoriates its atheist pretensions from within."—National Review

"Powerful, erudite and often savagely funny."—Globe and Mail (Best Books of the Year)

"With high style and light-hearted disdain, David Berlinski deflates the intellectual pretensions of the scientific atheist crowd. Maybe they can recite the Periodic Table by heart, but the secular Berlinski shows that this doesn't get them very far in reasoning about much weightier matters."—Michael J. Behe, author of Darwin's Black Box

“In a brief review, it’s impossible to convey not just the complexity of some of these issues, but the clarity, keenness, and breadth of learning that Berlinski brings to bear on them.”—American Spectator

"Berlinski's book is everything desirable: it is idiomatic, profound, brilliantly polemical, amusing, and of course vastly learned."—William F. Buckley Jr.

"A powerful riposte to atheist mockery and cocksure science, and to the sort of philosophy that surrenders to them. David Berlinski proceeds reasonably and calmly to challenge recent scientific theorizing and to expose the unreason from which it presumes to criticize religion."—Harvey Mansfield, Harvard University