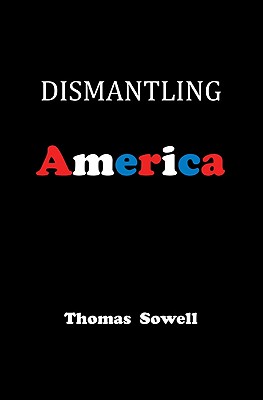 
Backordered
These wide-ranging essays -- on many individual political, economic, cultural and legal issues -- have as a recurring, underlying theme the decline of the values and institutions that have sustained and advanced American society for more than two centuries. This decline has been more than an erosion. It has, in many cases, been a deliberate dismantling of American values and institutions by people convinced that their superior wisdom and virtue must over-ride both the traditions of the country and the will of the people.

Whether these essays (originally published as syndicated newspaper columns) are individually about financial bailouts, illegal immigrants, gay marriage, national security, or the Duke University rape case, the underlying concern is about what these very different kinds of things say about the general direction of American society.

This larger and longer-lasting question is whether the particular issues discussed reflect a degeneration or dismantling of the America that we once knew and expected to pass on to our children and grandchildren. There are people determined that this country's values, history, laws, traditions and role in the world are fundamentally wrong and must be changed. Such people will not stop dismantling America unless they get stopped -- and the next election may be the last time to stop them, before they take the country beyond the point of no return.
Thomas Sowell is a senior fellow at the Hoover Institution, Stanford University. He is the author of dozens of books including Charter Schools and Their Enemies, winner of the 2021 Hayek Book Prize. He is the recipient of numerous other awards, including the National Humanities Medal, presented by the President of the United States in 2003.