The Meaning of It All: Thoughts of a Citizen-Scientist (Paperback) 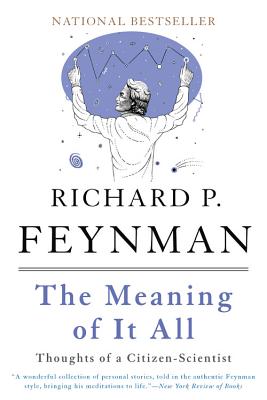 The Meaning of It All: Thoughts of a Citizen-Scientist (Paperback)


Not On Our Shelves—Ships in 1-5 Days
Many appreciate Richard P. Feynman's contributions to twentieth-century physics, but few realize how engaged he was with the world around him -- how deeply and thoughtfully he considered the religious, political, and social issues of his day. Now, a wonderful book -- based on a previously unpublished, three-part public lecture he gave at the University of Washington in 1963 -- shows us this other side of Feynman, as he expounds on the inherent conflict between science and religion, people's distrust of politicians, and our universal fascination with flying saucers, faith healing, and mental telepathy. Here we see Feynman in top form: nearly bursting into a Navajo war chant, then pressing for an overhaul of the English language (if you want to know why Johnny can't read, just look at the spelling of "friend"); and, finally, ruminating on the death of his first wife from tuberculosis. This is quintessential Feynman -- reflective, amusing, and ever enlightening.
Richard P. Feynman (1918-1988) was the Richard Chace Tolman Professor of Theoretical Physics at the California Institute of Technology. He was awarded the 1965 Nobel Prize for his work on the development of quantum field theory. He was also one of the most famous and beloved figures of the twentieth century, both in physics and in the public arena.