Some of Us Did Not Die: New and Selected Essays (Paperback) 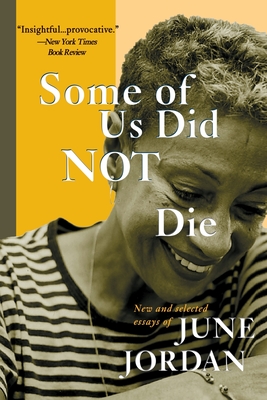 Some of Us Did Not Die: New and Selected Essays (Paperback)


Not On Our Shelves—Ships in 1-5 Days
"She remains a thinker and activist who 'insists upon complexity.' "Reamy Jansen, San Francisco Chronicle*Some of Us Did Not Die brings together a rich sampling of the late poet June Jordan's prose writings. The essays in this collection, which include her last writings and span the length of her extraordinary career, reveal Jordan as an incisive analyst of the personal and public costs of remaining committed to the ideal and practice of democracy. Willing to venture into the most painful contradictions of American culture and politics, Jordan comes back with lyrical honesty, wit, and wide-ranging intelligence in these accounts of her reckoning with life as a teacher, poet, activist, and citizen.
June Jordan was Professor of African American Studies at U.C. Berkeley and was born in New York City in 1936. Her books of poetry include Haruko / Love Poems and Naming Our Destiny: New and Selected Poems. She was also the author of five children's books, a novel, three plays, and five volumes of political essays, the most recent of which was Affirmative Acts.

For more than ten years, she wrote a regular political column for The Progressive magazine. Her honors included a National Book Award nomination, a Rockefeller Foundation grant, and a National Association of Black Journalists Award. June Jordan died in Berkeley, California on June 14, 2002.