"A Problem from Hell": America and the Age of Genocide (Paperback) 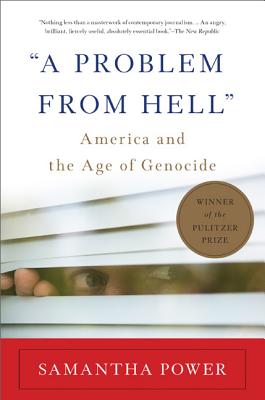 "A Problem from Hell": America and the Age of Genocide (Paperback)


On Our Shelves Now at:
From former UN Ambassador and author of the New York Times bestseller The Education of an Idealist Samantha Power, the Pulitzer Prize-winning book on America's repeated failure to stop genocides around the world

In her prizewinning examination of the last century of American history, Samantha Power asks the haunting question: Why do American leaders who vow "never again" repeatedly fail to stop genocide?

Power, a professor at the Harvard Kennedy School and the former US Ambassador to the United Nations, draws upon exclusive interviews with Washington's top policymakers, thousands of declassified documents, and her own reporting from modern killing fields to provide the answer. "A Problem from Hell" shows how decent Americans inside and outside government refused to get involved despite chilling warnings, and tells the stories of the courageous Americans who risked their careers and lives in an effort to get the United States to act.

She was the founding executive director of the Carr Center for Human Rights Policy at the Harvard Kennedy School and is also the author of the New York Times bestselling memoir The Education of an Idealist and Sergio: One Man's Fight to Save the World and the co-editor of The Unquiet American: Richard Holbrooke in the World.

Power is a former Balkan war correspondent and a recipient of the National Magazine Award and the Pulitzer Prize, among numerous other honors. She has been named by Time as one of the world's 100 Most Influential People and by Forbes as one of the World's 100 Most Powerful Women.
"Magisterial."—New Yorker

"Bracing.... Power [is] the new conscience of the U.S. foreign-policy establishment."—Time