Linked: How Everything Is Connected to Everything Else and What It Means for Business, Science, and Everyday Life (Paperback) 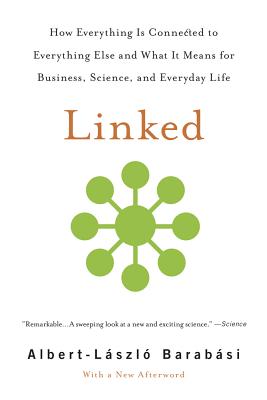 Linked: How Everything Is Connected to Everything Else and What It Means for Business, Science, and Everyday Life (Paperback)


Not On Our Shelves—Ships in 1-5 Days
The best-selling guide to network science, the revolutionary field that reveals the deep links between all forms of human social life

A cocktail party. A terrorist cell. Ancient bacteria. An international conglomerate. All are networks, and all are a part of a surprising scientific revolution. In Linked, Albert-LÃ¡lÃ³rabÃ¡, the nation's foremost expert in the new science of networks, takes us on an intellectual adventure to prove that social networks, corporations, and living organisms are more similar than previously thought. BarabÃ¡ shows that grasping a full understanding of network science will someday allow us to design blue-chip businesses, stop the outbreak of deadly diseases, and influence the exchange of ideas and information. Just as James Gleick and the Erdos-RÃ©i model brought the discovery of chaos theory to the general public, Linked tells the story of the true science of the future and of experiments in statistical mechanics on the internet, all vital parts of what would eventually be called the BarabÃ¡-Albert model.
Albert-László Barabási is the Robert Gray Dodge Professor of Network Science and a Distinguished University Professor at Northeastern University, where he directs the Center for Complex Network Research and holds appointments in the Department of Medicine at Harvard Medical School and the Central European University in Budapest.

A native of Transylvania, Romania, he received his Masters in Theoretical Physics at the Eötvös University in Budapest, Hungary and Ph.D. at Boston University. His previous work includes Bursts: The Hidden Pattern Behind Everything We Do (Dutton, 2010), which is available in five languages, and Linked: The New Science of Networks (Perseus, 2002), which is available in fifteen languages.

Barbási is the author of Network Science (Cambridge, 2016) and the co-editor of The Structure and Dynamics of Networks (Princeton, 2005). His work has led to many breakthroughs, including the discovery of scale-free networks in 1999, which continues to make him one of the most cited scientists today.
"Remarkable.... A sweeping look at a new and exciting science."—Science

"Linked could alter the way we think about all of the networks that affect our lives."—New York Times

"A pleasure to read.... It's the fact that all of these networks can be explained and understood using the same concepts, and the same mathematics, that makes this book so important."—Christian Science Monitor (A Best Book of the Year)

"Captivating.... Linked is a playful, even exuberant romp through an exciting new field."—Time Out New York

"Linked should be mandatory reading for academics as a primer in good writing. Barabási may be a scientist, but he didn't neglect his liberal arts education; his Renaissance man's curiosity roves across history, economics, medicine, and pop culture. He writes in understandable lay-speak glittering with wit."—Boston Globe

"Linked gets really interesting, showing how this new science promises to change the way we conduct everything from medical treatment to the war on terrorism."—Washington Monthly

"All researchers dream of making a discovery that will transform their field. Albert-László Barabási can go one better. In just three years, his discovery has started making waves in fields as diverse as ecology, molecular biology, computer science, and quantum physics."—New Scientist

"A sweeping look at a new and exciting science."—Donald Kennedy, editor-in-chief, Science Magazine

"These laws of networks may prove as robust and universal as Newton's laws of motion."—strategy + business (A Best Business Book of the Year)

"Linked is the best choice for the layperson, because [Barabási] minimizes the math and writes elegantly."—Detroit Free Press