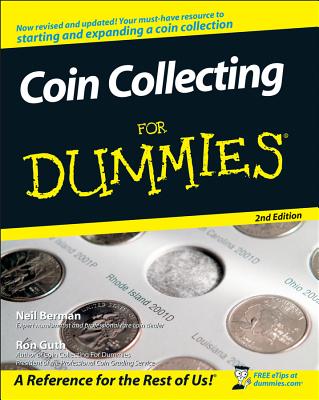 The perfect resource for coin collectors of all ages

Can't make heads or tails out of coin collecting? You need Coin Collecting For Dummies, 2nd Edition, the treasure trove on information on numismatics. This hands-on guide escorts you through the world's oldest hobby, helping you decide which type of coins you want to collect, keep your collection in mint condition, buy and sell coins on the Internet, find interesting coin shows to attend, and assemble and diversify a great collection.

The purpose of this fun, easy-to-access guide is to turn you into a world-class coin collector in as little time as possible. You'll learn what coins can teach you about history and geography, develop organizational and observational skills, and learn to use analytical tools, all without event thinking about it. And you'll learn the basics about ancient coins, U.S. coins, world coins, and the wild-and-wooly stuff that really gets your numismatic juices flowing. Discover how to:

When it comes to numismatics, Coin Collecting For Dummies, 2nd Edition is right on the money

Neil S. Berman: Neil S. Berman has been an expert numismatist and professional rare coin dealer since 1968. Coming back to the United States from Israel at the end of 1967, he apprenticed to the world-renowned Dutch numismatist and coin auctioneer Hans M. F. Schulman. He incorporated as Neil S. Berman, Inc., in 1968. In 1974, Neil became an associate of Metropolitan Rare Coin Company of New York. For the next several years, he represented Arthur and Donald Kagin of Des Moines, Iowa, then the largest coin dealer in the Midwest, as a purchasing agent. Later he represented Superior Galleries under the Goldbergs, also as a purchasing agent. In 1979, Neil, with his brother Jed, founded First Federal Coin Company, the first East Coast coin company to sell rare coins into IRA, Keogh, and pension plans. From 1983 until 1990, he was the purchasing agent for Asset Services, Inc., the largest coin company serving the financial community. Neil donated his large collection of German and Swiss silver minor coins to the American Numismatic Society (ANS) in 1989. In 1997, he received the American Numismatic Association (ANA) Service Award from ANA President David Ganz. In 2005 and 2006, he was associated again with Superior Galleries of Beverly Hills, this time under the ownership of numismatist Silvano DiGenova. Neil catalogued the U.S. gold in the 1977 Kagin's ANA Coin Auction Sale, the first New York coin auction sale in 1981 of Spink and Sons, England's oldest and largest coin dealer, and a coin auction sale by Superior Rare Coin Galleries of Beverly Hills in 2006. Neil has been published in Barron's, Trusts & Estates, The National Law Journal, The Financial Planner, Pensions World, and Executive Jeweler. In 1987, he wrote, with Hans Schulman, The Investor's Guide to United States Coins, which sold 40,000 copies and received a Numismatic Literary Guild award for Best Investment Book. In 2007, he wrote the second edition of the book with Silvano DiGenova. Neil has just completed a book on rare coin auctions. Ron Guth: Ron Guth is a jack-of-all-trades and master of one -- numismatics. Ron is a certified public accountant (CPA), a licensed auctioneer, and a writer, but the bulk of his time is spent on his true love -- coin collecting and dealing. Ron's battle with coin fever began when he was 12 years old, and he's never gotten over it. After a decade of collecting, Ron went professional in 1976, when he began working for a local coin shop in Tampa, Florida. In 1978, he partnered with David Goldsmith and purchased the Bay Area Coin Exchange in Tampa. Ron and Dave blasted through the silver boom, and then split up in 1981, when Ron moved to Evansville, Indiana (his wife's hometown), where he set up shop on First Avenue. In 1984, Ron formed Mid-American Rare Coin Auctions with Jeff Garrett of Lexington, Kentucky. The company quickly established itself as an innovative leader in the industry and, within the first year, became the fifth largest rare coin auction company in America. In 1988, Ron sold his interest in the company, went back to school to finish his bachelor's degree in accounting and finance, and has since become a numismatic consultant and a major dealer in German coins. In 1984, Ron won the American Numismatic Association's Wayte and Olga Raymond and Heath Literary awards. He has written many coin-related articles and is listed as a contributor to several books, including Walter Breen's Encyclopedia of United States Coins, Krause Publications's Standard Catalog of German Coins, Roger S. Cohen's American Half Cents, Walter Breen's Encyclopedia of United States Half Cents, and others. Ron has served as a numismatic consultant for many rare-coin companies, including major firms such as the Professional Coin Grading Services, Heritage Numismatic Auctions, and Early American History Auctions.