The Inextinguishable Symphony: A True Story of Music and Love in Nazi Germany (Paperback) 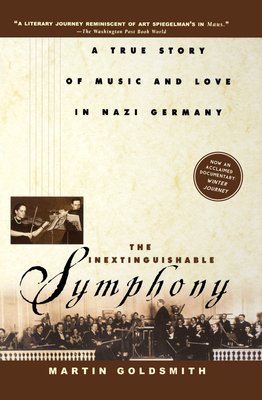 The Inextinguishable Symphony: A True Story of Music and Love in Nazi Germany (Paperback)

Set amid the growing tyranny of Germany's Third Reich, here is the riveting and emotional tale of G nther Goldschmidt and Rosemarie Gumpert, two courageous Jewish musicians who struggled to perform under unimaginable circumstances--and found themselves falling in love in a country bent on destroying them.

In the spring of 1933, as the full weight of Germany's National Socialism was brought to bear against Germany's Jews, more than 8,000 Jewish musicians, actors, and other artists found themselves expelled from their positions with German orchestras, opera companies, and theater groups, and Jews were forbidden even to attend "Aryan" theaters. Later that year, the J dische Kulturbund, or Jewish Culture Association, was created under the auspices of Joseph Goebbels's Ministry of Public Enlightenment and Propaganda. Providing for Jewish artists to perform for Jewish audiences, the Kulturbund, which included an orchestra, an opera company, and an acting troupe, became an unlikely haven for Jewish artists and offered much-needed spiritual enrichment for a besieged people--while at the same time providing the Nazis with a powerful propaganda tool for showing the rest of the world how well Jews were ostensibly being treated under the Third Reich.

It was during this period that twenty-two-year-old flutist G nther Goldschmidt was expelled from music school because of his Jewish roots. While preparing to flee the ever-tightening grip of Nazi Germany for Sweden, G nther was invited to fill in for an ailing flutist with the Frankfurt Kulturbund Orchestra. It was there, during rehearsals, that he met the dazzling nineteen-year-old violist Rosemarie Gumpert--a woman who would change the course of his life. Despite their strong attraction, G nther eventually embarked for the safety of Sweden as planned, only to risk his life six months later returning to the woman he could not forget--and to the perilous country where hatred and brutality had begun to flourish. Here is G nther and Rosemarie's story, a deeply moving tale of love and the remarkable resilience of the human spirit in the face of terror and persecution.

Beautifully and simply told by their son, National Public Radio commentator Martin Goldsmith, The Inextinguishable Symphony takes us from the caf's of Frankfurt, where Rosemarie and G nther fell in love, to the concert halls that offered solace and hope for the beleaguered Jews, to the United States, where the two made a new life for themselves that would nevertheless remain shadowed by the fate of their families. Along with the fate of G nther and Rosemarie's families, this rare memoir also illuminates the Kulturbund and the lives of other fascinating figures associated with it, including Kubu director Kurt Singer--a man so committed to the organization that he objected to his artists' plans for flight, fearing that his productions would suffer. The Kubu, which included some of the most prominent artists of the day and young performers who would gain international fame after the war, became the sole source of culture and entertainment for Germany's Jews. A poignant testament to the enduring vitality of music and love even in the harshest times, The Inextinguishable Symphony gives us a compelling look at an important piece of Holocaust history that has heretofore gone largely untold.

MARTIN GOLDSMITH is director of classical music programming at XM Satellite Radio in Washington, D.C. From 1989 to 1999, he was the host of National Public Radio's Performance Today. Prior to that he served for a dozen years at WETA-fm, the NPR affiliate in Washington, D.C., as producer, announcer, and music director. He lives in Maryland with his wife, Amy Roach.