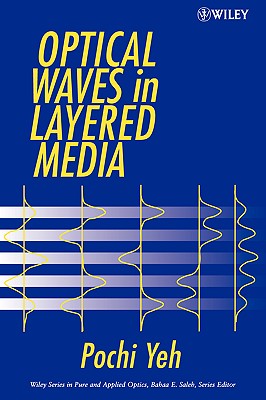 
Not On Our Shelves—Ships in 1-5 Days
Optical Waves in Layered Media presents a clear picture of the propagation of optical waves in layered media and teaches the reader how to design and analyze optical devices using such media. Starting from the simplest case of plane wave propagation in homogeneous media, the author introduces a new matrix method for studying the optical properties of multilayer structures consisting of isotropic materials. He then describes propagation in anisotropic layered media and in inhomogeneous layers, guided waves, the coupling of modes, and the optical properties of superlattices and quantum wells.

Optical Waves in Layered Media bridges the gap between theory and practice by means of numerical examples based on real-life situations.

POCHI YEH obtained his PhD in physics from the California Institute of Technology in 1977 for his research on nonlinear optics and optical properties of superlattices. Before he joined the electrical and computer engineering faculty at University of California-Santa Barbara in 1989, Dr. Yeh was the principal scientist of the Optics Department at Rockwell International Science Center in Thousand Oaks, California. Dr. Yeh is known for several important contributions in optics, including the development of a matrix method for optics of layered media; the theory of photorefractive phase conjugators; and the theory of wave mixing in nonlinear media.