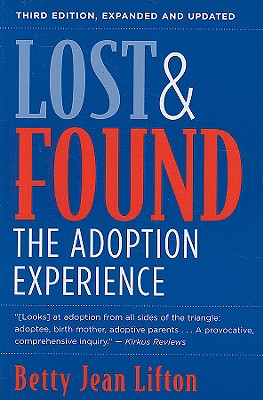 "[Looks] at adoption from all sides of the triangle: adoptee, birth mother, adoptive parents . . . A provocative, comprehensive inquiry."
---Kirkus Reviews

"Important and powerful . . . [the author] is concerned not just with adoptees but with the experience of adoptive parents and birth parents."
---Psychology Today

"A moving and powerful plea for open discourse instead of secrecy among the participants in the adoption process."
---Public Welfare, American Public Welfare Association

The first edition of Betty Jean Lifton's Lost and Found advanced the adoption rights movement in this country in 1979, challenging many states' policies of maintaining closed birth records. For nearly three decades the book has topped recommended reading lists for those who seek to understand the effects of adoption---including adoptees, adoptive parents, birth parents, and their friends and families.

This expanded and updated edition, with new material on the controversies concerning adoption, artificial insemination, and newer reproductive technologies, continues to add to the discussion on this important topic. A new preface and afterword by the author have been added, as well as a greatly expanded resources section that in addition to relevant organizations now lists useful Web sites.

Betty Jean Lifton, Ph.D., is a writer, psychotherapist, and leading advocate for adoption reform. Her many books include Journey of the Adopted Self and The King of Children, a New York Times Notable Book. She regularly makes appearances as a lecturer on adoption and has an adoption counseling practice in Cambridge, Massachusetts, and New York City.