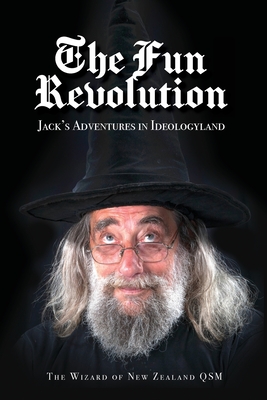 By The Wizard of New Zealand Qsm

Part memoir, part myth-busting, wrapped up in a guide for revolutionary change, this book challenges the dogmatic ideologies of the physical and social sciences, and updates them using a series of 'useful fictions' based on process philosophy.

More than just a finely-argued polemic, The Fun Revolution is a practical guide for a new generation of revolutionaries.

Following decades of wizardry, oratory and cultural activism, Jack demonstrates how well-designed practical jokes can throw spanners into the mental works of otherwise unstoppable bureaucratic control freaks. He shows how the power of love expressed playfully can overcome the intolerant love of power.

Topics include: the Blob; sending oneself up and raising one's consciousness by mistake; the use of levity to resolve conflicts between love-based religion and logic-based science; experimenting with a new form of alchemical marriage; advocating a great leap backwards to save the biosphere; and the reappearance of Heaven as a singularity in a postmodern inside-out physical universe.

This book will appeal to those widely-read individuals who are disillusioned by their experience in higher education, but who have not yet lost their native curiosity, scepticism, and sense of humour.

Jack was born in London in 1932 and christened Ian Brackenbury Channell. In 1990 he was appointed official Wizard of New Zealand by the Prime Minister, a position he continues to hold. He's been an RAF Flying Wing Adjutant, a London paper merchant, a major arts festival director, an academic lecturer in sociological theory, and a Living Work of Art. While at the University of New South Wales, Australia, he pioneered the Fun Revolution as a reform movement, leading in 1969 to his being appointed as the first official Wizard in residence at any university. Jack lives in Christchurch, New Zealand where he has been practising wizardry and jousting with bureaucrats since 1974.