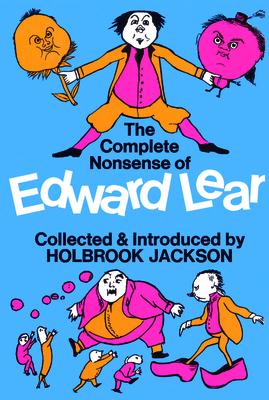 Here is every line of every nonsense book written by Edward Lear. In a single volume you get A Book of Nonsense, Nonsense Songs, More Nonsense Songs, Laughable Lyrics, and Nonsense Songs and Stories. No other low-price edition offers this complete collection.
You will meet such old favorites as The Dong With a Luminous Nose, The Jumblies, The Owl and the Pussycat, The Nutcrackers and the Sugar Tongs, and The History of the Seven Young Owls. Two hundred and fourteen limericks are in here as well, each illustrated with the drawing Lear composed specially for it. In addition, you'll find three different sets of Nonsense Botany, five Nonsense Alphabets, and dozens of other selections in both prose and verse.
All 546 of Lear's original illustrations are in this volume. With masterful simplicity and apparent naivet they tell of the dreamlike never-never land of childhood. Many Lear enthusiasts maintain that in these drawings the Laureate of Nonsense gave rise to an entire new style. Their influence has certainly been widespread, with echoes of Lear to be seen in the work of Thurber, Steinberg, Phil May, Bateman, and other artists and illustrators.
It has been a hundred years since Edward Lear, the advocate of illogic, first became known to a wide public. Children who begged to have his verses read to them have grown up to read Lear to their own children -- and to discover that his whimsy, imagination, and originality have their attraction for the adult mind as well.