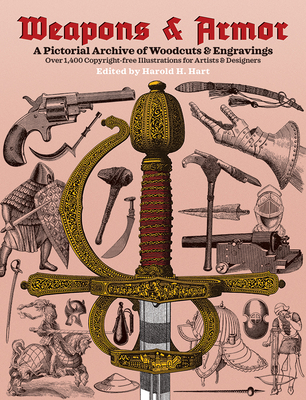 
Not On Our Shelves—Ships in 1-5 Days
(This book cannot be returned.)
A misericorde is a medieval poniard or dagger made for one purpose -- to give the coup de grace or killing stroke. It was a beautiful, deadly instrument with a graphic mission; its very shape and cut graphically manifest its age and those who used it.
Weapons throughout history chronicle ages, styles, and approaches to life and death; for artists, a weapons archive is a pictorial arsenal of powerful imagery. Here is such an arsenal: over 1,400 copyright-free illustrations of weapons and armor epitomizing the warlike times and peoples of this planet.
Twenty-two categories of offensive and defensive arms and armor include battle-axes, bows and arrows, cannons, catapults, clubs, daggers, handguns, machine guns, powder horns, rifles, spears, swords, tanks, suits of armor, helmets, shields, and other means of combat. These copyright-free black-and-white illustrations (with a few half-tones) have been culled from almost 50 separate sources, ranging from books of ancient armor to scarce foreign periodicals and engravings. Along with the arms themselves are those who wield them -- soldiers, warriors, knights, horsemen, hunters, jousters, duelists, arms manufacturers, aborigines, centurions, dragoons, musketeers, samurai, crusaders, in full period regalia. One plate identifies all the parts of a 17th-century suit of armor -- visor, gorget, tassets, epauliere, cuisse, chain mail, gauntlet, etc.; many show details of intricate Renaissance and modern carving on pommels, blades, rifle butts, and boomerangs. Some remarkable devices include the Chinese Tartar 2-handed sword, Malay creese, Tormentum, Maxim gun, 16th-century Italian cross-bow, Soviet tank from World War II, Indian damascened cuirass, bamboo lance, halberd, and the scimitar.
Unusual strokes may be visually delivered by such instruments as the Patagonian bola, a cane sword, the Zarabatana native blow gun, and the infamous holy water sprinkler.
Artists and designers will not find these rare emblems of warfare gathered together elsewhere in such a clearly printed format, so quickly accessible; historians of art, industry, and war as well as weapons fanciers will marvel at all the picturesque means here depicted of giving the coup de grace.