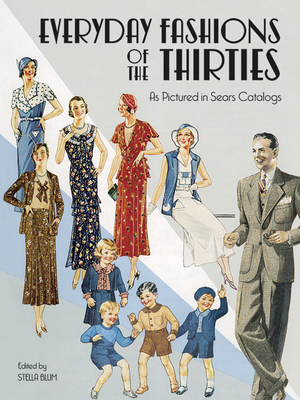 For thousands of women across America, hard hit when the frivolity of the twenties ended so resoundingly with the Crash of '29, the pages of the Sears catalog became an essential resource in maintaining a wardrobe. An ambitious marketing operation, it could not afford to take chances on haute couture; its fashions were geared as closely as possible to the prevailing tastes of the American people.
For this historically accurate sampling of authentic 1930s fashion, Stella Blum, former Curator of the Costume Institute at the Metropolitan Museum of Art in New York, selected for reproduction 133 representative pages from rare Sears catalogs of the period (fall and spring catalog for each year from 1930 to 1939). Hundreds of illustrations record what men, women, and children were actually wearing in the 1930s when, as a copyline from the Fall 1930 catalog proclaimed: "Thrift is the spirit of the day. Reckless spending is a thing of the past."
You'll see here how simpler women's fashion designs -- of more traditional, affordable material -- recaptured the feminine form with a more natural waistline and lower hemlines than seen in the twenties. For evening wear, longer dresses replaced flamboyant beaded short gowns while cloche hats, another twenties trademark, were replaced by berets, pillboxes, and turbans. The seriousness of the accessories and dresses endorsed by such Hollywood legends as Loretta Young, Claudette Colbert, and Fay Wray.
For historians of costume, nostalgia buffs and casual browsers, these pages afford a rare picture of how the average American really dressed during the thirties. It is an essential resource for study of the clothing of an important era which designers cannot afford to be without.