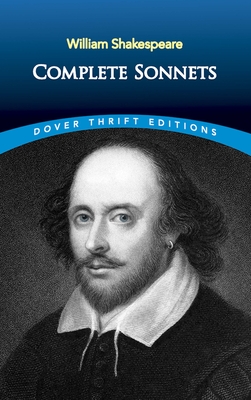 Without a doubt the most important of Shakespeare's nondramatic works, the sonnets have engendered reams of scholarly disputation as to the identity of the dark lady and the lovely boy to whom the vast majority are addressed. Controversy has also long simmered over the full name of the W.H. of the dedication. What is not in dispute is the superior quality of these lyrics, which rank among the finest sonnets ever written -- in any language.
Overt 150 poems deal with love, friendship, the tyranny of time, beauty's evanescence in power, death, and other themes in language unsurpassed in power, precision, and beauty. Now this inexpensive Dover edition enables any lover of poetry or fine literature to have this exquisite verse in his or her personal library. A brief glossary illuminates a number of archaic terms.

He was not of an age, but for all time, declared Ben Jonson of his contemporary William Shakespeare (1564-1616). Jonson's praise is especially prescient, since at the turn of the 17th century Shakespeare was but one of many popular London playwrights and none of his dramas were printed in his lifetime. The reason so many of his works survive is because two of his actor friends, with the assistance of Jonson, assembled and published the First Folio edition of 1623.