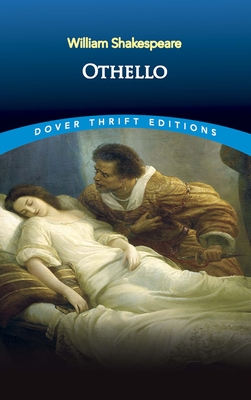 
Special Order—Subject to Availability
(This book cannot be returned.)
One of the greatest of Shakespeare's tragedies, "Othello" tells the story of a Moorish general who earns the enmity of his ensign Iago when he passes him over for a promotion. Bleak and unsparing, this play offers a masterly portrait of an archvillain and an astute psychological study of the nature of evil. Explanatory footnotes.
He was not of an age, but for all time, declared Ben Jonson of his contemporary William Shakespeare (1564-1616). Jonson's praise is especially prescient, since at the turn of the 17th century Shakespeare was but one of many popular London playwrights and none of his dramas were printed in his lifetime. The reason so many of his works survive is because two of his actor friends, with the assistance of Jonson, assembled and published the First Folio edition of 1623.