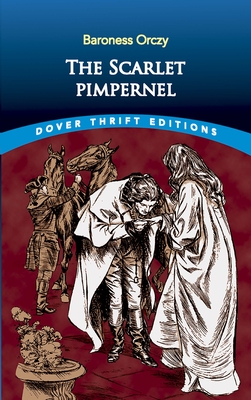 
Not On Our Shelves—Ships in 1-5 Days
(This book cannot be returned.)
By 1792, the idealism of the French Revolution has degenerated into a Reign of Terror. Ruthless mobs rule the streets of Paris, and each day, hundreds of royalists are sacrificed to the guillotine, with hundreds more condemned to follow. Their only hope lies in rescue by the Scarlet Pimpernel, the daring leader of an English faction that spirits aristocrats across the Channel to safety. This historical adventure tale first appeared in 1905, but its irresistible blend of romance, intrigue, and suspense renders it timeless. Readers thrill to the gallantry of the Pimpernel, whose nom de guerre derives from the wildflower he employs as a calling card. A scourge to the French authorities, the Pimpernel is the darling of the people -- particularly Marguerite Blakeney, who scorns her foppish husband, Sir Percy, as ardently as she admires the Pimpernel. The basis of a classic film, this ever-popular story has recently been adapted as a musical, to the delight of Broadway audiences.