The Garden of Heaven (Paperback) 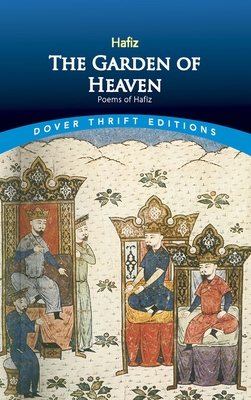 The Garden of Heaven (Paperback)

Hafiz has no peer. -- Goethe
Poetry is the greatest literary form of ancient Persia and modern Iran, and the fourteenth-century poet known as Hafiz is its preeminent master. Little is known about the poet's life, and there are more legends than facts relating to the particulars of his existence. This mythic quality is entirely appropriate for the man known as The Interpreter of Mysteries and The Tongue of the Hidden, whose verse is regarded as oracular by those seeking guidance and attempting to realize wishes.
A mere fraction of what is presumed to have been an extensive body of work survives. This collection is derived from Hafiz's Divan (collected poems), a classic of Sufism. The short poems, called ghazals, are sonnet-like arrangements of varied numbers of couplets. In the tradition of Persian poetry and Sufi philosophy, each poem corresponds to two interpretations, sensual and mystic.
This outstanding translation of Hafiz's poetry was created by historian and Arabic scholar Gertrude Bell, who observed, These are the utterances of a great poet, the imaginative interpreter of the heart of man; they are not of one age, or of another, but for all time.