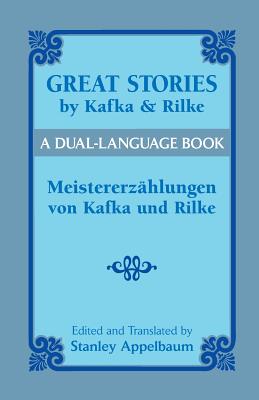 
Not On Our Shelves—Ships in 1-5 Days
(This book cannot be returned.)
At the turn of the twentieth century, the city of Prague hosted a cosmopolitan culture whose literary scene abounded in experimental writers. Two of the city's natives are featured in this dual-language volume: Franz Kafka, whose fiction is synonymous with the anguish of modern life; and the poet Rainer Maria Rilke, whose stories unfold in the same transcendent lyricism as his verse.
Twelve of Kafka's stories from the compilation Ein Landarzt (A Country Doctor) appear here, along with two tales from Ein Hungerk nstler (A Hunger Artist). Rilke's stories include Die Weise von Liebe und Tod des Cornets Christoph Rilke (The Ballad of Love and Death of Cornet Christoph Rilke), Die Turnstunde (The Gym Class), and Geschichten vom lieben Gott (Stories About the Good Lord).
Stanley Appelbaum has provided an introduction and informative notes to these stories, along with excellent new English translations on the pages facing the original German.