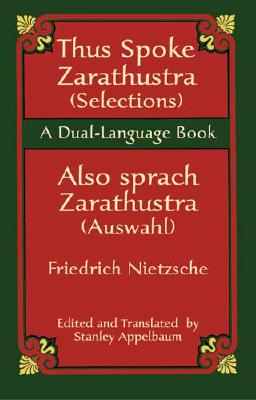 
Special Order—Subject to Availability
(This book cannot be returned.)
The most popular of Friedrich Nietzsche's works, Thus Spoke Zarathustra ranks among the most remarkable feats of German literature. A symphony of language, it abounds in every kind of wordplay and an intricate network of leitmotifs. This dual-language edition features one third of Nietzsche's work, keeping the most famous concepts intact and encompassing a variety of moods and modes as well as the author's full linguistic scope.
These selections reflect the most important philosophic concepts in the book, such as the death of God (i.e., the bankruptcy of the traditional Christian morality), with the subsequent need for a new morality administered by a more evolved humanity (the bermensch), and the will to power. Editor Stanley Appelbaum presents accurate English translations on the pages facing the original German, an informative introduction to the author's life and oeuvre, plus notes throughout the text and brief summaries of the omitted chapters.
Nietzsche's influence on twentieth-century thought is incalculable. Freud is reputed to have developed his theory of the ego from some passages in Zarathustra. The Surrealists and Existentialists admired Nietzsche, and his skepticism made him a model for Postmodernist thinkers. This volume represents an outstanding resource not only for students and teachers of German language and literature but also for anyone with an interest in literature, philosophy, and psychology.