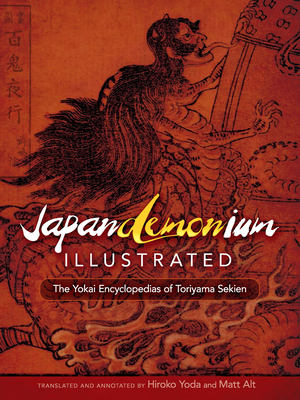 A fascinating, scholarly, beautifully illustrated, miscellanea of strange beasts, quelling demons, and otherworldly apparitions. JapandemoniumIllustrated will instruct you, amaze you, and transport you to a quintessential realm of Japanese lore. -- Guillermo del Toro, filmmaker
Such beautiful nightmares -- why bother to wake up? Long before Pok mon took to the streets, the Japanese saw monsters everywhere and in everything. Scholarly without being monstrously studious, Sekien's classic compendia of outlandish everyday demons compiled in this one fiendishly clever volume is sure to enchant even the most rational readers (poor misguided souls ) I sleep less now that I recognize the tenjo-name behind the spots on the ceiling. -- Alfred Birnbaum, editor/translator of Monkey Brain Sushi
Japanese folklore abounds with bizarre creatures collectively referred to as the yokai ― the ancestors of the monsters populating Japanese film, literature, manga, and anime. Artist Toriyama Sekien (1712-88) was the first to compile illustrated encyclopedias detailing the appearances and habits of these creepy-crawlies from myth and folklore. Ever since their debut over two centuries ago, the encyclopedias have inspired generations of Japanese artists. Japandemonium Illustrated represents the very first time they have ever been available in English.
This historically groundbreaking compilation includes complete translations of all four of Sekien's yokai masterworks: the 1776 Gazu Hyakki Yagyō (The Illustrated Demon Horde's Night Parade), the 1779 Konjaku Gazu Zoku Hyakki (The Illustrated Demon Horde from Past and Present, Continued), the 1781 Konjaku Hyakki Shū (More of the Demon Horde from Past and Present), and the 1784 Hyakki Tsurezure Bukuro (A Horde of Haunted Housewares). The collection is complemented by a detailed introduction and helpful annotations for modern-day readers.

Scholar and ukiyo-e woodblock artist Toriyama Sekien (1712-88) is famed for cataloging all species of yokai, the monsters of Japanese folklore.Translators Matt Alt and Hiroko Yoda have co-authored numerous books on Japanese pop culture, history, and folklore.