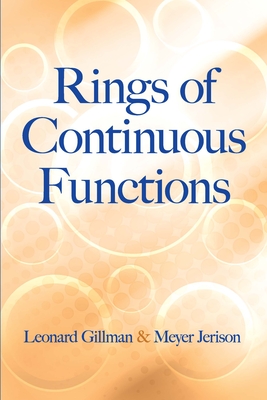 
Not On Our Shelves—Ships in 1-5 Days
(This book cannot be returned.)
Designed as a text as well as a treatise for active mathematicians, this volume begins with an unusual notice: The book is addressed to those who know the meaning of each word in the title. As such, it constituted the first systematic account of the theory of rings of continuous functions, and it has retained its secure position as the basic graduate-level book in this area.
The authors focus on characterizing the maximal ideals and classifying their residue class fields. Problems concerning extending continuous functions from a subspace to the entire space play a fundamental role in the study, and these problems are discussed in extensive detail. A thorough treatment of the Stone-Čech compactification is supplemented with a number of related topics: the Ulam measure problem, the theory of uniform spaces, and a small but significant portion of dimension theory. Hundreds of problems of varying difficulty appear throughout the text, providing additional details, describing counterexamples, and outlining new topics.
American mathematician Meyer Jerison (1922-1995) was on the faculty of Purdue University from 1951 until his retirement in 1991.Leonard E. Gillman (1917-2009) taught at the University of Rochester and the University of Texas and was President of the Mathematical Association of America in 1987-1988.