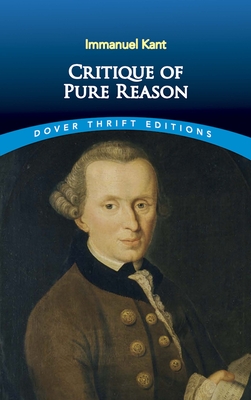 
Backordered
(This book cannot be returned.)
In his monumental Critique of Pure Reason, German philosopher Immanuel Kant (1724-1804) argues that human knowledge is limited by the capacity for perception. He attempts a logical designation of two varieties of knowledge: a posteriori, knowledge acquired through experience, and a priori, knowledge not derived through experience. Kant maintains that the most practical forms of human knowledge employ a priori judgments that are possible only when the mind determines the conditions of its own experience.
A cornerstone of Western philosophy, this seminal treatise was originally published in 1781. Kant, whose life was dedicated to a quiet and passionate quest for truth, expresses herein his unique system of philosophical thought, and his approach, known as transcendental idealism, based on meticulous investigations of metaphysics, ethics, and aesthetics. This translation by J. M. Meiklejohn offers a simple and direct rendering of Kant's work that is suitable for readers at all levels.
A central figure of modern philosophy, Immanuel Kant (1724-1804) synthesized rationalism and empiricism, and his thinking continues to influence the fields of metaphysics, epistemology, ethics, political philosophy, and aesthetics. The German philosopher's best-known maxim is a moral law that he called the categorical imperative, which states that morality is derived from rationality and all moral judgments are rationally supported.