The Recollections of Rifleman Harris: A British Soldier in the Napoleonic Wars (Dover Military History) (Paperback) 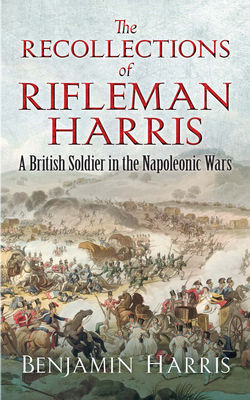 The Recollections of Rifleman Harris: A British Soldier in the Napoleonic Wars (Dover Military History) (Paperback)


Not On Our Shelves—Ships in 1-5 Days
(This book cannot be returned.)
Diaries, memoirs, and letters by officers of the Napoleonic era abound, but there are few reminiscences by common foot soldiers. This extraordinarily vivid and entirely authentic report by British rifleman Benjamin Harris offers rare glimpses of life among the enlisted men. Harris's personal anecdotes, brimming with ready wit and memorable descriptions, tell of military life from the bottom up: the soldiers' camaraderie amid physical hardships and inadequate supplies and equipment, their endemic drunkenness and frequent hunger, the terrible punishments meted out for even small infractions, and the narrow margin between death and survival.
In the mid-1830s, Harris was working as a London cobbler when he met a former British Army officer who asked him to recount his wartime experiences. A natural storyteller with a remarkable tale to tell, Harris recalled his years of active service, which began in 1803 when he joined the 95th Regiment of Foot in Ireland and were followed by campaigns from 1808 to 1809 in Portugal and Spain. First published in 1848, this memoir was neither popular nor well received during Harris's lifetime, but since its rediscovery in the early twentieth century, it has become one of the most valuable documents of the Peninsular War.
Benjamin Harris (1781-1858) was a rifleman in the English army, fighting against Napoleon in the European wars that culminated with Napoleon's loss at the Battle of Waterloo in 1815. By the time of Waterloo, Harris had endured many campaigns and had been forced by illness to leave the Army and return to England to ply his trade as a shoemaker. He had joined the 95th Regiment of Foot in 1803, serving first in Denmark and then in 1808-09 in Portugal and Spain. Back in England, Harris encountered a former British Army officer and prolific novelist named Henry Curling (1803-64), who recorded Harris' memories of his life as a soldier and created this unique text from those accounts.