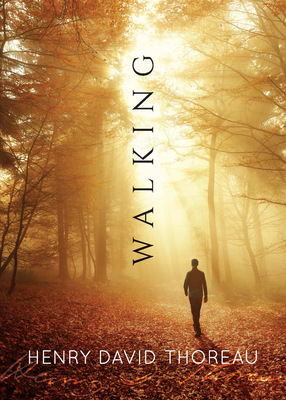 
Not On Our Shelves—Ships in 1-5 Days
(This book cannot be returned.)
For I believe that climate does thus react on man -- as there is something in the mountain air that feeds the spirit and inspires.
Henry David Thoreau's Walking began as a lecture in 1851 and ultimately appeared in The Atlantic Monthly in 1862, shortly after the author's death. The impassioned essay, which praises the merits of time spent in nature, has become one of the most influential works of the modern environmentalist movement. Thoreau's view of walking in nature as a self-reflective activity invites readers to embark on their own ramble in order to gain a wild and dusky self-knowledge unattainable elsewhere.
Americans felt the pressures of a changing world even in the relatively slow-paced 1800s, and Thoreau proposed balancing social stress with unhurried wanderings in fields and woods. His writings, from Civil Disobedience to Walden, remain popular because of their enduring relevance, and Walking bears a special resonance for modern readers who may have become disconnected from the natural world.