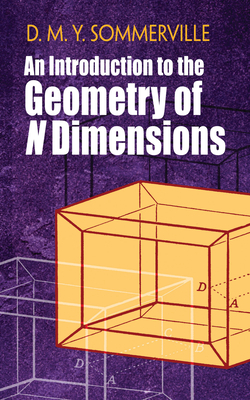 
Special Order—Subject to Availability
(This book cannot be returned.)
For many years, this was the only English-language book devoted to the subject of higher-dimensional geometry. While that is no longer the case, it remains a significant contribution to the literature, exploring topics of perennial interest to geometers.
In the first four chapters, author D. M. Y. Sommerville explains the fundamental ideas of incidence, parallelism, perpendicularity, and angles between linear spaces. Chapter V presents analytical geometry from the projective point of view, exploring some of the simplest ideas relating to algebraic varieties and offering a more detailed account of quadratics. Chapter VI examines analytic geometry of n dimensions from the metric point of view. The remaining four chapters deal with polytopes and address some of the elementary ideas in analysis situs. Chapter VIII treats the content of hyper-special figures, and the final chapter establishes the regular polytope.
For advanced undergraduate and graduate students in mathematics as well as historians of mathematics
Dover unabridged republication of the edition originally published by Methuen & Co., London, 1929.
Scottish mathematician Duncan MacLaren Young Sommerville (1879-1934) studied at the University of St. Andrews and taught there from 1902 to 1914. In 1915, he emigrated to New Zealand, where he was appointed Professor of Pure and Applied Mathematics at Victoria College, Wellington. His other books include Elements of Non-Euclidean Geometry and Analytical Conics.