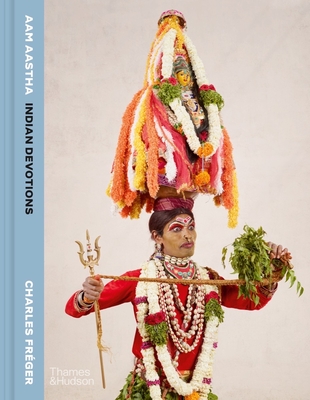 A celebration of Indian folk rituals and costumes bursting with color, captured by renowned photographer Charles Fréger, who brings a distinctive and powerful vision to the genre of portrait photography.

In AAM AASTHA, internationally renowned photographer Charles Fréger continues to spotlight global traditions and cultures by celebrating the powerful visual aspects of Indian folk culture and religious ritual. India is home to a myriad of local traditions, legends, and religions, each with their own festivals, rites, and ceremonies. Celebrations burst with vivid colors and often wildly exuberant costumes, some representing gods and goddesses, others legendary heroes from Sanskrit epics such as the Mahabharata and the Ramayana.

Fréger’s unmistakable style of portraiture emphasizes the complexity of these adornments—masks and headdresses, costumes, and body paint—and the abundance of imagination that expresses India’s countless stories and characters, both human and divine.

This spectacular gathering of warrior figures, deities, musicians,epic characters, and their avatars is accompanied by texts by novelist and journalist Anuradha Roy and philosopher and critic Catherine Clément, who contextualize the events, as well as descriptions of individual costumes, masks, and rituals by Kuhu Kopariha. This compelling sequence of new portraits will enthrall those with an interest in folk traditions, as well as the followers of this internationally acclaimed photographer.

Charles Fréger is a photographer based in Rouen, France. Internationally acclaimed for his subtle and poetic portraiture, he has devoted himself to the representation of social groups. Previous books include Portraits in Lace: Breton Women, Yokainoshima: Island of Monsters, and Cimarron: Freedom and Masquerade.