Robert's Rules of Order: The 1893 Edition of the Famous Manual of Parliamentary Procedure (Mass Market) 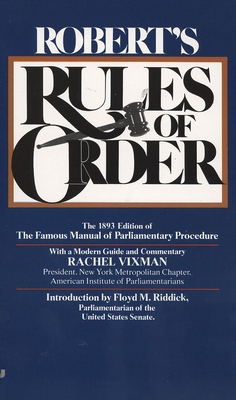 Robert's Rules of Order: The 1893 Edition of the Famous Manual of Parliamentary Procedure (Mass Market)


Special Order—Subject to Availability
Motions, rules, and procedures—all the problems of running a successful meeting smoothly and fairly—are covered in this special edition of a famous manual of parliamentary procedure.

A clear presentation of the complex Procedure of Motions, clarifications of many technical points, explanatory charts and diagrams have been added to the original 1893 Robert’s Rules of Orders to make it especially valuable to clubs, churches, and organizations, of every type and size.

For this long-needed task, Rachel Vixman draws on half a century’s experience in directing national organizations and teaching parliamentary law. Now President of the New York Metropolitan Chapter, American Institute of Parliamentarians, and Parliamentarian of the New York City Federation of Women’s Clubs, she has taught and spoken all over the United States and Canada, and has presided as parliamentarian at many national and state conventions.
Henry M. Robert (1837–1923) was a military engineer. His book Robert's Rules of Order (also known as Pocket Manual of Rules of Order for Deliberative Assemblies) became the most widely used manual of parliamentary procedure to this day in the United States. During the Civil War, Robert worked on the defenses of Washington, DC, Philadelphia, and several ports in New England. He served as the president of the Board of Engineers from 1895 to 1901. Upon his retirement he was appointed chief of engineers.