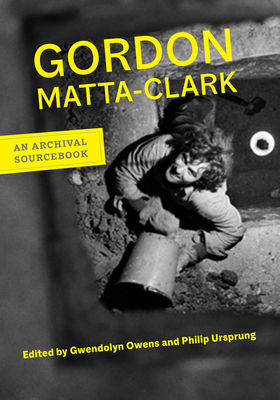 
On Our Shelves Now at:
An essential reference that provides new understanding of the thought processes of one of the most radical artists of the late twentieth century.

Gordon Matta-Clark (1943–1978) has never been an easy artist to categorize or to explain. Although trained as an architect, he has been described as a sculptor, a photographer, an organizer of performances, and a writer of manifestos, but he is best known for un-building abandoned structures. In the brief span of his career, from 1968 to his early death in 1978, he created an oeuvre that has made him an enduring cult figure.

In 2002, when Gordon Matta-Clark’s widow, Jane Crawford, put his archive on deposit at the Canadian Centre for Architecture in Montreal, it revealed a new voice in the ongoing discussion of artist/architect Matta-Clark’s work: his own. Gwendolyn Owens and Philip Ursprung’s careful selection and ordering of letters, interviews, statements, and the now-famous art cards from the CCA as well as other sources deepens our understanding of one of the most original thinkers of his generation. Gordon Matta-Clark: An Archival Sourcebook creates a multidimensional portrait that provides an opportunity for readers to explore and enjoy the complexity and contradiction that was Gordon Matta-Clark.

Gwendolyn Owens is Director of the Visual Arts Collection at McGill University and former Consulting Curator of the Matta-Clark Archive at the Canadian Centre for Architecture, Montreal.

Philip Ursprung is Professor of the History of Art and Architecture in the Department of Architecture, ETH Zurich.