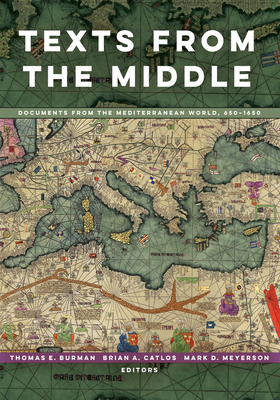 
Not On Our Shelves—Ships in 1-5 Days
Texts from the Middle is a companion primary source reader to the textbook The Sea in the Middle. It can be used alone or in conjunction with the textbook, providing an original history of the Middle Ages that places the Mediterranean at the geographical center of the study of the period from 650 to 1650.

Building on the textbook’s unique approach, these sources center on the Mediterranean and emphasize the role played by peoples and cultures of Africa, Asia, and Europe in an age when Christians, Muslims, and Jews of various denominations engaged with each other in both conflict and collaboration. The supplementary reader mirrors the main text’s fifteen-chapter structure, providing six sources per chapter.

The two texts pair together to provide a framework and materials that guide students through this complex but essential history—one that will appeal to the diverse student bodies of today.


Thomas E. Burman is Professor of History at University of Notre Dame. He is a scholar of Christian-Muslim-Jewish intellectual and cultural history in the medieval Mediterranean. His book Reading the Qur’an in Latin Christendom was awarded the Jacques Barzun Prize in Cultural History.

Brian A. Catlos is Professor of Religious Studies at University of Colorado Boulder. He works on Christian-Muslim-Jewish relations in the premodern Mediterranean. His most recent book, Kingdoms of Faith: A New History of Islamic Spain, is available in eight languages and as an audiobook.

Mark D. Meyerson is Professor in the Department of History and Centre for Medieval Studies at the University of Toronto. He works on Christian-Muslim-Jewish relations in the premodern Mediterranean and on the history of violence. His book A Jewish Renaissance in Fifteenth-Century Spain was runner-up for the National Jewish Book Award, USA.