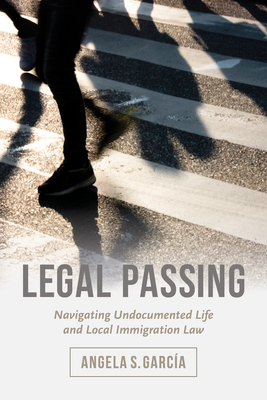 
Not On Our Shelves—Ships in 1-5 Days
Legal Passing offers a nuanced look at how the lives of undocumented Mexicans in the US are constantly shaped by federal, state, and local immigration laws. Angela S. García compares restrictive and accommodating immigration measures in various cities and states to show that place-based inclusion and exclusion unfold in seemingly contradictory ways. Instead of fleeing restrictive localities, undocumented Mexicans react by presenting themselves as “legal,” masking the stigma of illegality to avoid local police and federal immigration enforcement. Restrictive laws coerce assimilation, because as legal passing becomes habitual and embodied, immigrants distance themselves from their ethnic and cultural identities. In accommodating destinations, undocumented Mexicans experience a localized sense of stability and membership that is simultaneously undercut by the threat of federal immigration enforcement and complex street-level tensions with local police. Combining social theory on immigration and race as well as place and law, Legal Passing uncovers the everyday failures and long-term human consequences of contemporary immigration laws in the US.

Angela S. García is a sociologist and Assistant Professor in the School of Social Service Administration at the University of Chicago.

"Legal Passing helps make sense of not only a fragmented U.S. immigration system but also this system’s diverse effects on the undocumented immigrants subject to its varied laws and policies. Through rigorous data collection, a sharp sociological imagination, and lucid prose, Angela S. García breaks new ground by revealing the insidious ways immigration measures simultaneously integrate and marginalize millions of undocumented immigrants and their U.S.-citizen family members from the country they call home."
— Ethnic and Racial Studies

"...a real achievement and an outstanding contribution to law and society scholarship. As a study of legal consciousness, the book reveals how migrants perform legality through quotidian and embodied practices. It elucidates the uneven costs that “illegality” imposes across different geographies, demonstrating how space and place shape the effects of immigration laws, and how immigration laws also shape space and place. Eminently readable, Legal Passing will engage undergraduate and graduate students, as well as an inter-disciplinary community of socio-legal scholars."
— Law & Society

"[Legal Passing] maintains an explicit and thoughtful focus throughout on the complex, messy, and often unanticipated consequences of law."
— Social Forces