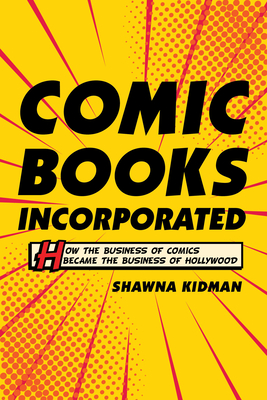 
Not On Our Shelves—Ships in 1-5 Days
Comic Books Incorporated tells the story of the US comic book business, reframing the history of the medium through an industrial and transmedial lens. Comic books wielded their influence from the margins and in-between spaces of the entertainment business for half a century before moving to the center of mainstream film and television production. This extraordinary history begins at the medium’s origin in the 1930s, when comics were a reviled, disorganized, and lowbrow mass medium, and surveys critical moments along the way—market crashes, corporate takeovers, upheavals in distribution, and financial transformations. Shawna Kidman concludes this revisionist history in the early 2000s, when Hollywood had fully incorporated comic book properties and strategies into its business models and transformed the medium into the heavily exploited, exceedingly corporate, and yet highly esteemed niche art form we know so well today.
Shawna Kidman is Assistant Professor of Communication at the University of California, San Diego.
"The field needs studies like this, and it needs academics like Kidman who take on the sometimes unglamorous task of exposing the frames – the structures and infrastructures – within which, and between which, the colourful figures of comics and screen so fluidly move."

"Comic Books Incorporated chronicles the rise of the comic book business by documenting its emergence as a cultural product. Highlighting the transmedia infrastructures that made comic books possible, Kidman discusses comic books and their history as a medium, how comic books connect to politics and society, and the rise of comic book fan culture . . . Highly recommended."
— Choice

"Kidman’s methodology provides a fresh and exciting contribution to our understanding of the relationship between comics and Hollywood in the twenty-first century."
— Media Industries Journal