Baby Jails: The Fight to End the Incarceration of Refugee Children in America (Paperback) 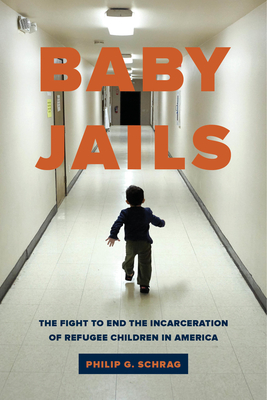 Baby Jails: The Fight to End the Incarceration of Refugee Children in America (Paperback)


Not On Our Shelves—Ships in 1-5 Days
“I worked in a trailer that ICE had set aside for conversations between the women and the attorneys. While we talked, their children, most of whom seemed to be between three and eight years old, played with a few toys on the floor. It was hard for me to get my head around the idea of a jail full of toddlers, but there they were.”

For decades, advocates for refugee children and families have fought to end the U.S. government’s practice of jailing children and families for months, or even years, until overburdened immigration courts could rule on their claims for asylum. Baby Jails is the history of that legal and political struggle. Philip G. Schrag, the director of Georgetown University’s asylum law clinic, takes readers through thirty years of conflict over which refugee advocates resisted the detention of migrant children. The saga began during the Reagan administration when 15-year-old Jenny Lisette Flores languished in a Los Angeles motel that the government had turned into a makeshift jail by draining the swimming pool, barring the windows, and surrounding the building with barbed wire. What became known as the Flores Settlement Agreement was still at issue years later, when the Trump administration resorted to the forced separation of families after the courts would not allow long-term jailing of the children. Schrag provides recommendations for the reform of a system that has brought anguish and trauma to thousands of parents and children. Provocative and timely, Baby Jails exposes the ongoing struggle between the U.S. government and immigrant advocates over the duration and conditions of confinement of children who seek safety in America.
Philip G. Schrag is the Delaney Family Professor of Public Interest Law at Georgetown University and the author or coauthor of sixteen books, including Asylum Denied.
“A must read for anyone interested in the legal and political history of asylum seekers, from the Reagan to the Trump administrations.”
— CHOICE

"Schrag’s attention as a legal scholar to relevant litigation and legislation is not overly technical for non-legal readers, yet it is sufficiently detailed to help emerging law professionals better understand the historical arc of law and precedent associated with the detention of immigrant children and families. Baby Jails also stands out because of how adeptly Schrag integrates the stories of advocates and organizations into his treatment of legal history."

"The immediate and lasting importance of this work is that it forces readers to confront evil done under the guise of “the law” and within the auspices of the legal."
— Religious Studies Review