That's Not Funny: How the Right Makes Comedy Work for Them (Hardcover) 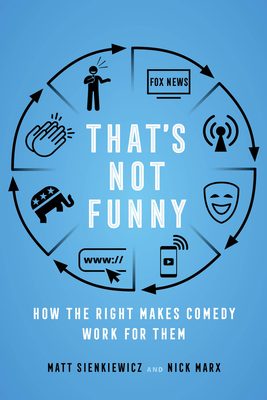 That's Not Funny: How the Right Makes Comedy Work for Them (Hardcover)

A rousing call for liberals and progressives to pay attention to the emergence of right-wing comedy and the political power of humor.

"Why do conservatives hate comedy? Why is there no right-wing Jon Stewart?" These sorts of questions launch a million tweets, a thousand op-eds, and more than a few scholarly analyses. That's Not Funny argues that it is both an intellectual and politically strategic mistake to assume that comedy has a liberal bias. Matt Sienkiewicz and Nick Marx take readers––particularly self-described liberals––on a tour of contemporary conservative comedy and the "right-wing comedy complex."

In That's Not Funny, "complex" takes on an important double meaning. On the one hand, liberals have developed a social-psychological complex—it feels difficult, even dangerous, to acknowledge that their political opposition can produce comedy. At the same time, the right has been slowly building up a comedy-industrial complex, utilizing the humorous, irony-laden media strategies of liberals such as Jon Stewart, Samantha Bee, and John Oliver to garner audiences and supporters. Right-wing comedy has been hiding in plain sight, finding its way into mainstream conservative media through figures ranging from Fox News's Greg Gutfeld to libertarian podcasters like Joe Rogan. That's Not Funny taps interviews with conservative comedians and observations of them in action to guide readers through media history, text, and technique. You will find many of these comedians utterly appalling, some surprisingly funny, and others just plain weird. They are all, however, culturally and politically relevant—the American right is attempting to seize spaces of comedy and irony previously held firmly by the left. You might not like this brand of humor, but you can't ignore it.

Matt Sienkiewicz is Associate Professor and Chair of the Boston College Communication Department.

Nick Marx is Associate Professor of Film and Media Studies in the Department of Communication Studies at Colorado State University.

"Astute and accessible. . . . As Sienkiewicz and Marx convincingly argue, comedy’s power can be used to shift the ideological and political needle in any direction depending on who is telling the jokes. We should be paying attention lest we ignore an entire ecosystem working to accumulate not just fans but political power."
— New Review of Film and Television Studies